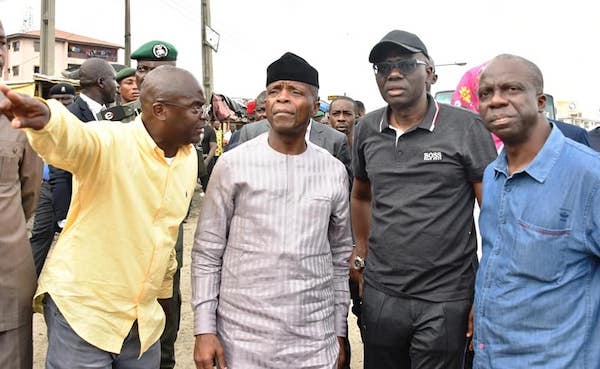 Vice President Yemi Osinbajo on Saturday revealed plans by the Federal Government to solve the longtime problem of gridlock at Apapa roads in Lagos.

Osinbajo, while speaking with newsmen in Lagos on Saturday, said the Federal Government will build more ports across the country to decongest the gridlock in and out of the Apapa ports.

Osinbajo also inspected the Lilipond transit truck park, Creek Road and other networks of roads leading to the Apapa port.

The vice president was accompanied on the tour by Governor Babajide Sanwo-Olu of Lagos State and the Managing Director of the Nigerian Ports Authority (NPA) Hadiza Bala Usman, among others.

“With this, it is obvious that there is a need to find an alternative quickly and to expand, where that is possible.

“The Lekki port is an ongoing project which will be a great help when completed because it will support the Apapa and Tin Can ports.

“Also, we are dredging the Warri Port which is aimed to decongest the traffic into and out of the Apapa and Tin Can ports,” Osinbajo said.

Osinbajo also noted that the Federal Government would continue to implement short and long term measures to ensure a long-lasting solution to the gridlock in the Apapa area of the state and its environs.

“You will see that the entry route to the port has been cleared. So, we need to understand that there are short term and mid to long term solutions.

“One of the mid-to-long term measures is to decongest the cargo traffic coming into the port,” he said.

He went further that the government was set to improve infrastructure and call up system for trucks and the ports while working on harnessing opportunities of the intermodal transport system.

“So, I can tell you that there are different approaches toward getting better movement in and out of Apapa.

“The other thing is the clearing of the trailers and tankers on the road so that there can be easy access to the port and you will see that there is considerable improvement within the axis.

“The Mile 2 end is the axis where we think that there is a difficulty but we think that in the next couple of days, it will be resolved especially with the opening of the Tin Can Island trailer parks and the palliative work that is ongoing all the way to Mile 2.”

Osinbajo expressed satisfaction over the work carried out by the Presidential task force vested with the responsibility of decongesting the truck-laden roads where residents spend all days grounded.