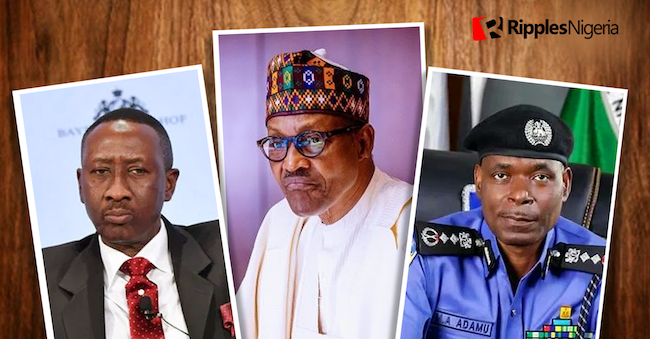 The National Security Adviser (NSA), Maj. Gen. Babagana Monguno, was in the eyes of the storm during the week when he recanted on an earlier statement about misappropriation of funds earmarked for the fight against insurgency in the country.

Like government officials normally do, he hid under the dog-eared excuse of being misquoted, shifting the blame to the media.

President Buhari also showed his muscles when he had a meeting with traditional rulers and affirmed his shoot at sight order.

We also tracked three other stories that gave Nigerians a lot of talking points.

On March 12, the National Security Adviser (NSA), Maj. Gen. Babagana Monguno (retd), employed the age-old trick of shifting the blame to the media when he ‘cleared’ the air on a statement credited to him on the alleged missing arms procurement funds under the immediate past service chiefs.

A statement from his office said Monguno was quoted out of context by some sections of the media in an interview he had with the BBC.

“We would like to state that the NSA was quoted out of context as he did not categorically say that funds meant for arms procurement were missing under the former Service Chiefs as reported or transcribed by some media outlets from the BBC interview,” the statement read, among others.

As weak as this turn around by Maj. Gen. Babagana Monguno may seem, the import of it is not lost on Nigerians as it suggests that he may have been whipped into line by some imagined forces or simply playing mischief, having lost out in a presumed power play.

Monguno, as the National Security Adviser of the country, sure knew what he was talking about when he said that arms procurement funds were missing but, as had been the case often with most political weaklings, he had to return to his vomit to either save his job or drag innocent Nigerians into an intra class war defined by shameless squabbles over access to the country’s dwindling resources.

On March 11, President Muhammadu Buhari had a meeting with high ranking traditional rulers in the country at the Presidential Villa in Abuja where he vowed to deal “harder with criminals and terrorists” wreaking havoc on every part of the country.

He had said, “What surprises me is what is happening now in the North-West where the same people, with the same culture, are killing each other, taking their livestock and burning properties.

‘‘As a result of that, we had a four-hour meeting of the National Security Council attended by the Ministers of Internal Affairs, Defence, Foreign Affairs, Service Chiefs, Chief of Defence Staff, the Inspector-General of Police and others and we gave clear instructions.

“One thing that got to the press, which I read myself, was that anyone with an AK-47 will be shot. This is because AK-47 is supposed to be registered and it is only given to security officials.”

READ ALSO: QuickRead: Buhari’s hollow assurances. Four other stories we tracked and why they matter

The surprise expressed by President Buhari at the level of insecurity in Nigeria, particularly the northwest, continues to signal how near helpless his administration had become in dealing with bandits and terrorists.

Indeed, the internecine wars and the unceasing banditry go to show the fast descent into anarchy and how Nigeria may just be preparing its qualifications for listing as a failed state.

On March 9, President Muhammadu Buhari once again gave reasons why Nigeria’s interest in neighbouring Niger Republic will not go away anytime soon.

He added that since Niger shares a 1,400 kilometres-long border with Nigeria, it was important for Nigeria to pay serious attention to any development within its borders.

“We are concerned about their stability, and I am glad the elections went well. I am happy it was transparent as attested to by most of the observers,” Buhari said.

Beyond the issue of Nigeria sharing 1,400 kilometres-long border with Niger Republic, the endless romance the Buhari-led administration has continued to cultivate with the West African country can only point to a relationship that goes beyond the ordinary.

If anyone is in doubt, the multi-billion dollar projects that seek to take infrastructural developments to the doorsteps of Niger speak forcefully to some long term commitments.

From the proposed rail line from Kano to Maradi, to the signing of an agreement to import fuel from Niger’s only refinery, Niger may become the new haven for the northern political class seeking fresh hideouts for stolen public resources.

On  March 9, the Inspector-General of Police (IGP), Mohammed Adamu, insisted that he has the legal right to occupy his office till either 2023 or 2024, negating his mandatory retirement after serving for 35 years.

Adamu, while responding to suit file by a lawyer, Maxwell Opara, said the new Nigeria Police Act gave him a four-year tenure, which would only lapse in either 2023 or 2024.

“The office of the Inspector-General of Police is conferred with a special status, unique and distinct from other officers of the Nigeria Police force.

“Upon appointment, the IGP is only accountable to the President of the Federal Republic of Nigeria and the Nigeria Police Council and this fact submit makes his office a quasi-political office with a tenure of four (4) years pursuant to Section 7(6) of the Nigeria Police Act, 2020,” he said.

Arguing that he can be in office till 2023 or 2024, if he so desires, Adamu, whose tenure had effectively ended on February 1, before President Buhari ‘graciously’ extended it by another three months, is only seeking to exploit the usual gaps within Nigeria’s legal system and buy more time for his troubled tenure.

Seeking to force himself on the nation speaks to the culture of impudence among the ruling class who give no qualms about a culture of sitting tight and lording it over a hapless populace.

The development also signposts a growing feeling that the President has lost control of leadership, giving room for a rudderless society where contending cabals are now fiercely exploiting available windows to reign supreme.

It would seem, in the circumstance, that Adamu’s moves reflect crass opportunism and not loyalty to the constitution of the country.

On March 12, the National Security Adviser (NSA), Babagana Monguno was in the news again when he insisted that there was no need for Nigeria to engage foreign mercenaries to defeat terrorism in the country.

In a press briefing held in Abuja,  Monguno said the Buhari-led administration believes the country is well equipped to deal with Boko Haram’s insurgency and other security challenges on its own without seeking outside help.

“President Buhari is more interested in how to utilise the nation’s resources to win the counter-terrorism war.

“What we’re looking at here is that we have the resources; it’s just misapplication and under-utilisation that has affected our abilities to deal with these people,” Monguno said.

Monguno may be living in self denial to believe that Nigeria can win the war against insurgency without engaging the services of foreign mercenaries as many have advocated.

Indeed, his disposition betrays the hidden feelings within country’s corridors of power which suggest that national pride is the reason Nigeria may be stranded in no man’s land in the fight against terrorism.

The insurgency war has gone on for over 10 years without the Nigerian military being able to declare total victory, and Monguno would be playing the Ostrich to believe that he feels the pains of the Northeast better than the governors of the region who have openly lobbied for external help.

ASUU threatens to resume strike over alleged victimization of members, non-payment of salaries