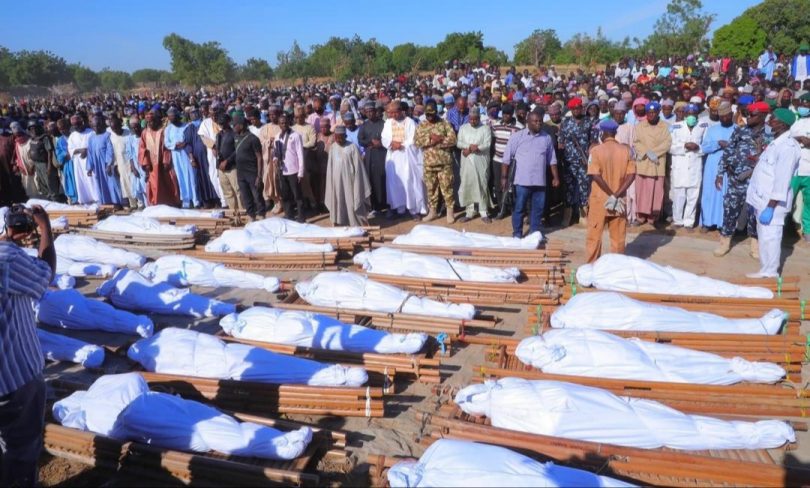 Nigerians on social media Sunday reacted aggressively to the cases of insecurity and bad governance being suffered by the country in recent times.

The following topics trended across social platforms in the day and gained massive engagements:

Since the killing of 43 rice farmers by suspected Boko Haram terrorists in Borno state on Saturday November 28, Nigerians have continued to call for the resignation of both President Muhammadu Buhari and his Service Chiefs following the worsening spate of insecurity ravaging the north.

According to reports, terrorists were said to have invaded a rice plantation in Zabarmari village, Jere Local government area where a group of 60 farmers had gathered to harvest rice.

At least 43 of them were killed while 6 were critically injured and their farmlands destroyed.

The concern drove the hashtag #ZabarmariMassacre and #SecureNorth to the trends as well as other phrases like “Sai Baba”, “aso rock”, “Service Chiefs” and “Enough is Enough”.

Although a devastating incident as the President had described earlier Sunday, most Nigerians have seized the opportunity to take a swipe at Twitter users from the North (Arewa Twitter) for their hypocritical stance against insecurity, citing their support for the government concerning the Lekki toll gate shooting of unarmed protesters last month.

He never reach that level nah, saiBuhari till 2066

It’s forbidding to protest against our leaders please Buhari is doing his best. Sai Baba! ✌🏻

Buhari is doing well, economy is booming, Arewa is secure and in safe hands, no insecurity in Nigeria, we are all enjoying good governance under Buhari and Osinbajo, Buhari's service chiefs are doing well, nobody should criticise Sai Baba, God bless Nigeria.

God forgive me. Me too. The northerners have used their stupidity to pursue the humanity in me but no matter what it’s sad. Very very sad. I remember how I cry like a baby with catarrh running out of my nose during thr Lekki massacre and I cried bitterly when I saw northerners

I guess the only time people think about injustice is when it happens to them.
If you have a voice use it#ZabarmariMassacre pic.twitter.com/3fGDo3q5OF

Nigerians on Twitter dragged the Yobe State governor and Caretaker Committee Chairman of the All Progressives Congress (APC), Mai Mala Buni for saying that he spends at least three to four days in a month in Yobe State.

This was in response to claims by critics that he had abandoned the state for party duties in Abuja.

Speaking with BBC News Hausa, the governor stated that he still discharged his duties effectively whether he was in the state or not and did not need to advertise to the public when he would either be present or absent.

Mai Mala Buni, the current gov of Yobe State, and the caretaker chairman of the APC was accused by people in his state that he spends his entire time in Abuja.

In his response during his interview with BBC Hausa, Buni said in that he visits Yobe atleast 3 times in a month😌😢😭

What Yobe State governor is doing is exactly what local government councilors do in Nigeria. They leave their place of primary assignment to live in the States capital. If the State assembly members were not his party loyalists, he ought to have be impeached. Not fit for office.

Is three days sufficient to see the affairs of your people. Even a child would crave more talk more of people that look up to you. Fem! Yobe

Yobe State Governor was criticised for staying out of Yobe but he said his critics are unfair because he visits Yobe 3days a month.

If YOU go to work 3days a month,
What will happen to you?

The hashtag bore a general outcry by concerned Nigerians who were distressed with the increasing cases of killings and bloodshed bedeviling the nation.

I asked on Facebook: "who is safe in Nigeria today?"

This is gut wrenching #EndNaijaKillings

Nigeria does not have a President & Commander-in-chief. What we have is a charlatan and space waster.
How many more people have to die for Buhari to keep being an oxygen wasting vessel at Aso villa?
You pray to God and you forget you will be accountable to God#ZabarmariMassacre

There has to be a more, concerted effort across the nation in calling out Buhari. He has failed. This is on him. Everyone should hold him accountable and turn on the heat. He would do the right thing! We can't continue like this.#ZabarmariMassacre#EndNaijaKillings

The Nigerian Government is full of clueless foolish greedy old men and women with zero idea on how to manage crisis, far from relatable and oblivious to the issues of the common Nigerian#EndNaijaKillings

Elect a clown. Expect the circus!