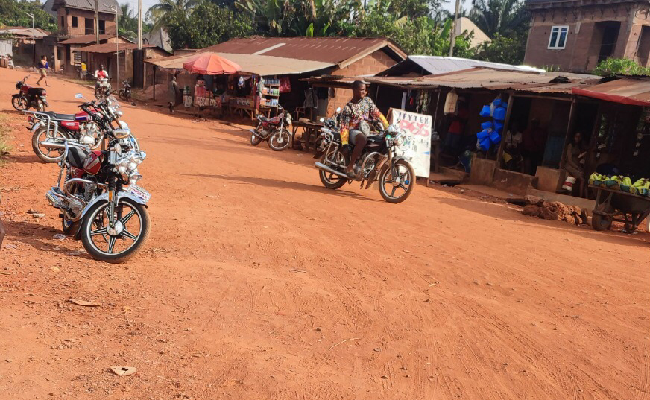 Counterpart funded road projects between the world Bank and Enugu State government have started to fail, as the state government has failed to meet up with promises it made two years ago. ARINZE CHIJIOKE reports:

When Amos Ugwu hired young men to till his farmland and prepare it for the planting season in 2021, he hoped that the harvest would be bountiful. Inside the farmland, located along Obiagu-Ohom Orba road in Udenu local government in Enugu State, he planted Yam and Cocoa Yam.

Sadly, when the rains intensified and the one-side drainage system that runs through the road could not contain the volume of water, his farm was submerged and he lost everything, after investing over N200,000 as he claims. Now, he has abandoned the farm for another one in a nearby community where he has to pay at the end of each harvest season.

“I had to go into palm wine tapping to be able to pay my children’s school fees, five of them at the time together with the support of my wife who is a primary school teacher,”he said.

Ugwu inside his farm points to where water flows from to his community.

Enugu State had been selected, alongside Adamawa, Osun, Niger and Imo states for the second phase of the project which spans a six-year period. Commissioner for Works and Infrastructure in Enugu, Greg Nnaji had announced that the project had an approved budget of N7.6 billion and that the state government had already paid a counterpart fund of N400,238,237.00 million.

According to a World Bank document, the project development Objective (PDO) was to improve the transport conditions and bring sustained access to the rural population, through rehabilitating and maintaining key rural transport infrastructure in a sustainable manner.

Part of what the RAMP was intended to achieve was curbing harvest losses for farmers like Ugwu and increasing economic opportunities by improving transport conditions across communities and access to the rural population.

While the project involved earthworks and drainages, according to RAMP-2 project coordinator in Enugu, Engr. Chinedu Ugwu, Chairman House Committee on Information at the Enugu State House of Assembly, Hon Jeff Mba said that the government felt that having spent millions of naira on earth work, there was need to find a way of asphalting it to ensure that the road does not fail after some time.

At an event held to inaugurate 30 Community Based Road Maintenance Group, comprising about 330 men and women selected across the communities that benefitted from the RAMP -2 in December 2020, Enugu State governor, Ifeanyi Ugwuanyi promised that his administration was working to asphalt all the roads by 2021 and 2022 fiscal years.

Drainage only on one side of the Obiagu-Ohom Orba Road

Represented by his Deputy Chief of staff at the time, Prof. Malachy Ukwueze, Ugwuanyi said that the rural roads development remained a key to attaining rapid and accelerated rural development and that when asphalted, the roads would become more functional and sustainable.

Sadly, more than two years after, the projects’ purpose is failing as some of the roads have become pothole ridden and almost impassable, especially whenever it rains. In communities such as Ugwu’s, farms and houses have been abandoned due to the impact of rain.

Because the less than 1km road was constructed with a drainage system on one side, water coming from nearby communities such as Imilike submerges it whenever there is heavy downpour, finding its way into farms and homes of residents. Sometimes, the drainage is filled with sand from the road.

“Even the culvert is not big enough to contain the volume of water, “he said “If the road was asphalted, it would not be easy for water to settle, “he said. “We have met the governor and he promised to work on the road. But till now, we have not seen him”.

Apart from farmers, motorcyclists also bear the brunt of the road. Chukwudi Abonyi said that he has had to fix his tire severally after plying the road because as rain washes off the sands, it leaves stones scattered everywhere and makes it easy for tires to get punctured.

In some communities, RAMP roads have been asphalted, including the 22km Neke-Mbu-Ogbodu Aba road and the 26.665km Ukpabi-Nimbo-Ugbene Ajima-Eziani, raising questions as to why the government abandoned some of the roads that hold similar economic importance.

Like the Ngwo-Nsude road, the 23.600 km Owere-Umuabor-Edem Umabor-Aguudene-Mbu road graded with a drainage system is failing. And residents say they pay higher transport fares to get to some locations especially when it rains.

A member of the community, Stephen Nnana said that he now treks long distances because he cannot afford the exorbitant transport prices as distance that would ordinarily cost N150 now costs as much as N300.

This November, Nneka Ugwuagu’s daughter, Joy skipped classes for one week after she was down with fever and cough, following months of exposure to dust along the St Mary Ngwo-Nsude road.

Ugwuagu owns a provision store along the road where she sells beverages. And each day, after school, her two children would come to stay with her. She said she has taken medications due to exposure to the dust.

In 2020, the 6.25km St Mary Ngwo-Nsude road was graded with drainage on one side under RAMP-2. When work started, Ugwuagu said she was happy and hoped that it would be asphalted, especially because it is the shortest route to Nsude, another community in Udi LGA.

“We were told that the road will be completed for our businesses to thrive” said Ugwuagu. “But it has been more than two years since it was graded and there are no signs that the contractor will return”.

Now, the road is ridden with potholes and sometimes, as car owners and motorcycle owners try to navigate through the narrow road, they run into shops and destroy wares. Every day, Ugwuagu cleans her wares because the dust emanating from the road often settles on them. Sometimes, she said it discourages people from buying what she sells.

Some sources who spoke to this reporter said that part of reasons the road is narrow is because some community members who own houses along the road did not allow the government to destroy them since there was no form of compensation.

At Omoha market-which is about 5 minutes from Ugwuagu’s shop, women who sell food stuffs say they have treated cough severally. They say that the state of the road also affects business especially when it rains and the road is submerged.

An elder in the community, Augustine Okwor said that community members have been the ones filling up the road whenever it develops potholes. He adds that sometimes, the single drainage is filled up, hence water settles on the road, washing off its surface.

He said that the road holds a strategic economic importance for the people of Ngwo, hence the government needs to asphalt it. A tricyclist, Ejiofor Gilbert also said that he spends one hour and sometimes more to get to 9th mile and other locations when he can simply spend some minutes on the Ngwo-Nsude road.

Special adviser on media to Governor Ifeanyi Ugwuanyi, Ezea Samson said that while the government is desirous of asphalting all rehabilitated roads to make them more comfortable for the people, it has other financial obligation it is trying to meet.

“Some communities were not accessible before the project”, he said. “None of the roads is originally meant to be tarred by the concept of RAMP” and that is why compensation is not paid wherever it is constructed”.

He confirmed that while some of the roads have been asphalted by government, no government can attend to the whole infrastructure needs of the people while in office. He however noted that it is expected that the roads will develop potholes and that is why Community Based Road Maintenance Groups were inaugurated to help maintain the roads.

“Government cannot be everywhere hence community leaders ought to ensure that the roads are maintained by the CBMGs,” he said.

Mba said that he has followed up on some of the roads and the government has said it is committed to the project having started asphalting some of the roads in Nsukka and Uzo Uwani in Enugu North senatorial zone.

Projects executed in line with specification

When contacted, the Chief Executive Officer of Martin, Patrick and Joseph Limited, the company that handled the projects in Orba and Eha Alumuna, Mike Nwachukwu said that it was done in accordance to the specification given by the World Bank.

“After we finished, the projects were confirmed okay and we were discharged and given our practical certificate of completion that indicated that we had done our part of the job “he said. “What the World Bank did through RAMP is only to open rural communities that were formally not accessible”.

He explained that because the projects were earthworks, it is expected that they will develop potholes when rain falls and vehicles travel on them, adding that the roads with incomplete drainages were also undertaken in accordance to the engineering design approved by World Bank.

This story was supported by the Udeme project of the Centre for Journalism Innovation and Development (CJID).

Related Topics:#featuredEnuguWorld Bank
Up Next