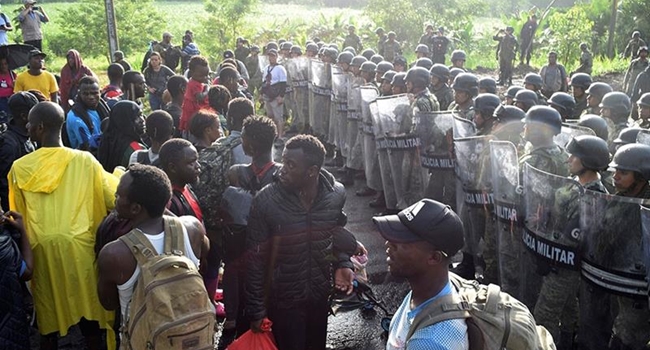 A caravan carrying no fewer than 1,000 migrants and asylum seekers from various African, Caribbean and Central American countries has been blocked by heavily armed Mexcan immigration and security forces.

Reports say the migrants who set out together from Tapachula were halted during a major operation by the National Guard troops which blocked the highway, the main corridor for commercial traffic between Mexico and Guatemala.

According to reports, the migrants, following in the footsteps of past caravans, planned to spend the first night in Huixtla, 41km (25 miles) north, but their journey was cut short approximately three-quarters of the way there.

“What can we do?” Lucie*, an asylum seeker from the Democratic Republic of the Congo, told Al Jazeera as she gestured at the security forces blocking the route.

“We have no other option. We have to pass,” she said.

The Mexican National Immigration Institute said in a statement on Sunday that the institute, “with complete respect for human rights, carried out actions to invite the foreign nationals who formed the contingent that departed from the city of Tapachula, Chiapas, to turn to the institute to get to know the options for the regularisation of their stay in the country or return to their various destinations.”