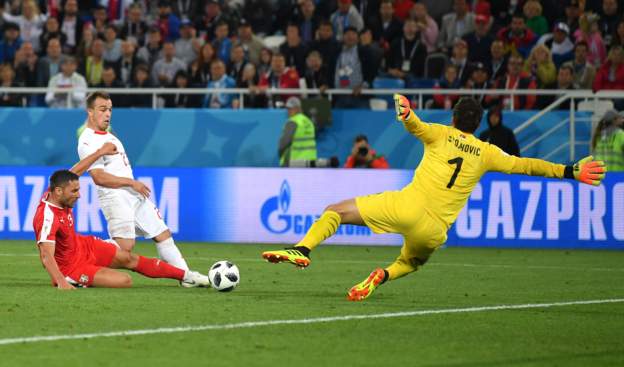 A late goal by Xherdan Shaqiri helped Switzerland come from behind to beat Serbia 2-1 in a 2018 FIFA World Cup Group E clash at the Kaliningrad Stadium in Russia on Friday.

It was a great turnabout from Switzerland as a 90th-minute strike by Shaqiri sealed the win after 52nd-minute equaliser by Granit Xhaka canceled Aleksandar Mitrovic’s 5th-minute opener.

Serbia dominated in the first half and had a strong claim for a second half penalty turned down. But the Swiss came out on top.

Read Also: ‘Nothing is impossible!’ – Buhari tips Eagles to qualify from group

In the other game of the group earlier on Friday, five-time champions Brazil sealed their first win at the tournament by beating Costa Rica 2-0.

With Costa Rica already out of the competition, Switzerland need only a point in their final game against Costa Rica to be through.

And Serbia will have to beat Brazil if they are going to have a go at the last 16.