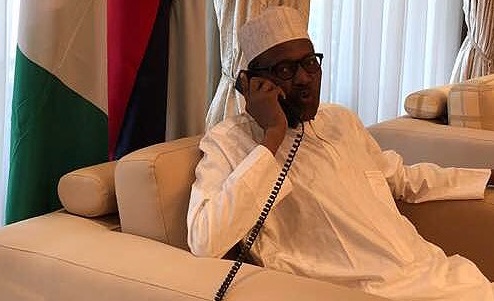 Following Super Eagles’ victory over Iceland on Friday, Nigeria’s president, Muhammadu Buhari (GCFR) says he is confident that the national team can advance from their ‘difficult’ Group D at the 2018 FIFA World Cup.

A record-setting brace by Ahmed Musa sealed a 2-0 victory for the Gernot Rohr side at the Volgograd Arena in Russia, and boosted the team’s chances of reaching the knockout stages of the competition.

The Eagles began their campaign on a disappointing note after they fell 2-0 to Croatia last weekend, but has now won the delight and praises of home fans, including the number one citizen, after they secured their first win in Russia.

“President Muhammadu Buhari heartily congratulates the Super Eagles on their victory Friday over the national team of Iceland in their second match at the Russia 2018 FIFA World Cup,” the President’s senior media aide Shebi Garba tweeted.

“The President expresses particular delight at the confidence, discipline, team-work and indomitable spirit displayed by the young Nigerian players.”

Buhari, who hosted the team at the Villa in Abuja before their departure to London ahead of the tournament, reiterates that the Eagles can go very far in the competition if they believe in themselves, and calls on all Nigerians to continue in their support for the team.

The spokesman added: “President Buhari urges them not to limit themselves but sustain the current winning momentum by going all out against their last group opponent, Argentina, next week.

“According to him, ‘I am confident that if our players believe in themselves, they can qualify out of their difficult group and even go very far in the tournament,” adding that “with determination, nothing is impossible.’

“The President urges all Nigerians to continue to rally round the Nigerian ambassadors with their prayers and other forms of support. #SoarSuperEagles.”

Also on Twitter, Vice President Professor Yemi Osinbajo did not fail to congratulate the Eagles after they sealed the huge victory.

“Two Goals!!! We are winning this. Bring it home our Super Eagles,” the Prof tweeted.

Nigeria face Argentina on Tuesday in a fight for who would advance and who would go home.

World Cup 2018: Switzerland come from behind to beat Serbia