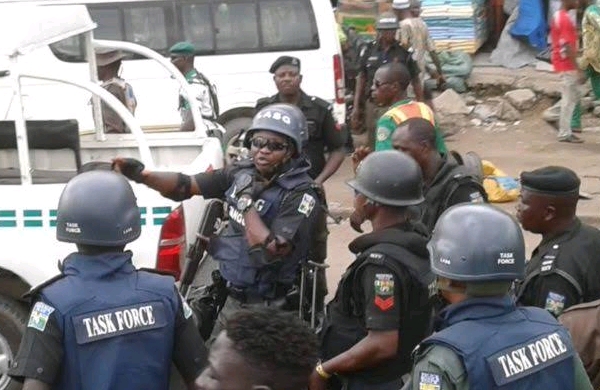 26 persons suspected to be cultists have been arrested by operatives of the Lagos State Environmental Sanitation and Special Offences Task force.

In a statement issued on Sunday by the Head, Public Affairs Unit of the Task Force, Adebayo Taofiq, the Chairman of the agency, CSP Olayinka Egbeyemi, confirmed that the suspects were arrested during an enforcement operation tagged ‘Operation Restore Sanity to Lagos.

Egbeyemi said that the taskforce carried out the operation around ‘Isale-oja’, ‘Funmilayo’, ‘Ile-pako at Amoo’, ‘Orile by cannal’, ‘Papa-Ashafa’,‘Dopemu’ and ‘Old Oko-oba’ in Agege.

The force said it arrested about 100 “Awawa boys’’ who have since been charged to court for breach of public peace, possession of arms and unlawful society group in 2017 and 2018,

“Criminal activities perpetuated by these various cult groups, particularly the dreaded ‘Awawa’ cult gang had become a serious threat to lives of residents and innocent members of the public around the areas.

“It was an eye-sore seeing these miscreants and cultists robbing, raping and freely smoking Indian hemp with under age boys and girls during day time and at night,’’ he said.

Egbeyemi added that another 64 miscreants and hoodlums, including three female teenagers were arrested during over-night raid around Oshodi.

According to him, dangerous weapons and substance suspected to be Indian hemp were recovered from the 64 miscreants.

“These miscreants and hoodlums were those attacking/breaking motorists’ windscreen and disturbing innocent members of the public by dispossessing them of their valuables such as cell phones, wallets and jewelleries around Oshodi.

“It is disheartening that most parents have abdicated their responsibility toward their children as the youth are now found to be deeply involved in gangsterism.

“Honestly, most of the crimes committed across the state are perpetrated by the youth who lack parental care,” he said.

The chairman, assured that “Operation Restore Sanity to Lagos’’ would be a continuous exercise, adding that it would be extended to other areas known to be inhabited by undesirable elements across the state.