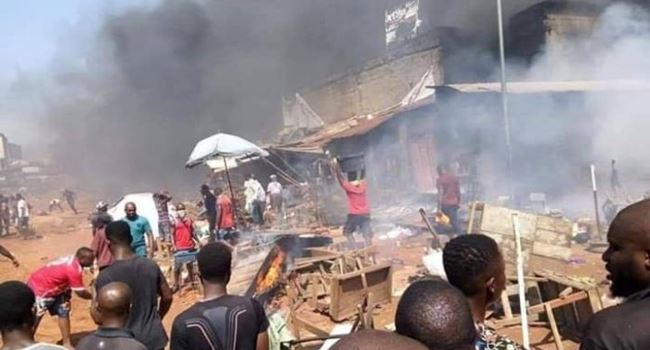 Barely 48 hours after a fire disaster at the Ochanja market, Onitsha, left several people dead and destroyed property worth millions of Naira, another tanker laden with fuel has exploded in the city.

The latest explosion, which was said to have occurred at the wee hours of Friday, happened along Enugu-Onitsha expressway by Bessoy filling station, Onitsha, Anambra State.

The tanker loaded with petrol, reportedly fell in the middle of the road, spilling its contents along the drainages.

It was learnt that following the fire that resulted as the result of the incident, residents near the area ran out of their buildings for fear of being consumed.

It was learnt that millions of Naira worth of property, including buildings, vehicles and other valuable were gutted by the fire.

As at the time this report was filed, no casualty was recorded.

The Commissioner of Police in the state, John Abang, who had confirmed the incident, said that the fire service, unlike In the previous fire incident, responded promptly after they were contacted by police.