Home » Business » #AtikuinLagos: Atiku vows to privatise NNPC even at the risk of his life 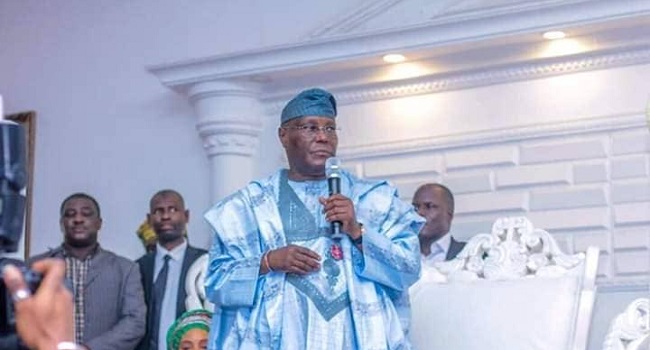 The presidential candidate of the Peoples Democratic Party (PDP) Wednesday, expressed the seriousness he attaches to the privatisation of the Nigerian National Petroleum Corporation (NNPC) vowing to do so even at the risk of his life.

Atiku, who described the NNPC as a ‘mafia organization’, made the vow at an interactive session in Lagos with the business community, explaining that he sold the idea to former President Olusegun Obasanjo with whom he worked with as a deputy between 1999 and 2007.

According to Atiku, the NNPC would run better if it is not managed by the government.

“Let me go back to my experience. When we got into office, I walked up to my boss and said, “Sir, there are two mafia organisations in government: one is the Nigerian National Petroleum Corporation while the other one is the National Electricity Power Authority.

“I said unless we dismantle these mafia organisations, we cannot make progress. Let’s privatise them… the long and short of this is that I am committed to privatisation as I have said. I swear even if they are going to kill me, I will do it (privatise NNPC)”, Atiku said.

The former Vice President also related how an expert in the petroleum sector influenced his stance on the privatisation of the NNPC.

“I asked a Nigerian professor based in America; I said, ‘Prof, do you have a ministry of petroleum in America?’ He said no. I said, ‘Do you have an organisation like the NNPC over there?’ He said no. And America produces oil more than any country? He said yes.

“So I asked him, ‘How do they do it in America?’ and he said taxation, and I decided that I will go by taxation too”, Atiku said.

Atiku, who decried the delay by the President Muhammadu Buhari administration in passing the Petroleum Industry Governance Bill, also touched on the level of unemployment in the country, declaring that it was worrisome.

Read also: #AtikuinLagos: I won’t be Petroleum or education minister because I’m not qualified —Atiku

According to him, unemployment would be a bigger problem for the country if left unchecked.

He said: “We must create jobs, if not we will get mobbed one day by the unemployed youths. They are like a time bomb… When businesses are folding up, shops are closing, industries are falling, foreign direct investments are not attracted; poverty is embarrassingly becoming our trademark, the rating of our hardworking businessmen by international rating agencies is becoming dismal.

“When we have a government that has remained insensitive to all these, I feel it is the time not only to offer myself for service to salvage the situation but also to reiterate my aim to create a strong, resilient and prosperous economy that creates jobs and opportunities for all of us.”

The PDP flagbearer also spoke on the how a technology-driven governance can help tackle corruption in the country.

“We are more educated than the UAE and one of the ways they have been able to ensure that there is minimal corruption is to introduce technology-driven governance. They tried to eliminate personal contact between members of the faculty with government officials. We can finally eliminate corruption because it is being played virtually in the public sector. Don’t think we cannot do it; we can do it.

“Fighting corruption is not an economic policy.No country in the world will focus on only fighting corruption; the various toll gates in government are a problem. In Ukraine and Rwanda, money goes directly from the Federal Government to schools unlike here where the money goes through different agencies”, Atiku said.