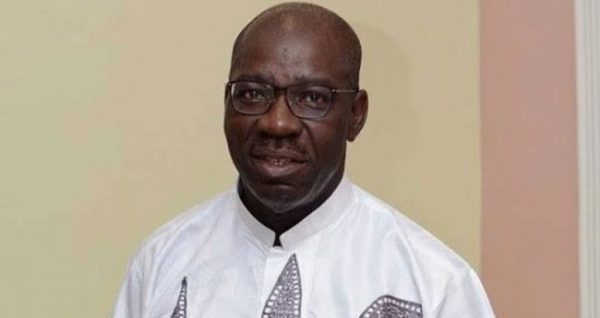 Edo State Governor, Godwin Obaseki, has spoken up about the recent call on federal legislators to take over Edo House of Assembly pending when the crisis rocking the state lawmakers is resolved.

The governor, who spoke at a well-attended rally in Benin City on Thursday, challenged those he described as ‘Abuja politicians’ to come and take over activities of the state assembly.

Obaseki’s statement is coming after 14 members of Edo House of Assembly said to be loyal to the national chairman of the APC, Adams Oshiomhole, Tuesday stormed the National Assembly to pray the federal lawmakers to take over the running of the state assembly.

The position of the 14 lawmakers were communicated to the federal lawmakers by House of Reps members from Edo State led by Comrade Peter Akpatason and Professor Julius Ihonvbere.

Apparently in response to that development, Obaseki dared the Abuja politicians to come take over Edo Assembly. According to him, these are politicians that have refused to come home.

He further stated that Edo is in safe hands with himself, his Deputy, Philip Shaibu and Secretary to State Government, Barr. Osarodion Ogie.

Obaseki, whose rift with his predecessor Oshiomhole, has continued to widen, creating political tension in the state, added that the current political crisis in the state was to distract him but that he would remain focused on delivery of democracy dividends to the people.

“When I resumed as Governor, pensioners were always protesting in the streets because they were not being paid. I am happy that they no longer protest today.

“I will not allow anybody chop the little money we have today. That money is meant to be invested so that we can have better future. That is the fight, that is the struggle. The struggle started 12 years ago in this town. The struggle has not ended. It has entered gear two. The same thing that happened 10 years ago. Nothing has changed.

“It is unfortunate that some people who were with us 12 years ago, we do not know what has happened to them. It is a struggle we will win. It is a struggle that says that the people must lead. Democracy is about people. Whatever we are doing as a government is for you. This is just the beginning.

“We are building our technical schools so that everybody will have a trade. After 20 years of democracy, we cannot continue to behave as if we do not have democracy.

“Those people who are parading themselves singing everywhere for themselves and  their pockets, Edo people are watching you. Those of you who gone to Abuja to say people should come and invade Edo and seize our House of Assembly, we are waiting for you.

“We have no fear at all.  We have resolved to continue to do what is best for our state and for our country. We have no doubt that we are on the right course.

“We dare you that nobody can stop the progress in Edo State. I assure that you have a government that is resolved to make Edo number one. Help us maintain peace. Without peace there will be no prosperity. They know that if we continue to have the peace we had in the last two years, nobody will catch us.

“People who say they represent us in Abuja no longer come. They stay there and start throwing stones at home. Those Abuja politicians who we refused to send back and those who got there by mistake want to disturb the peace of Edo. We will not let them,” Obaseki said at the rally.