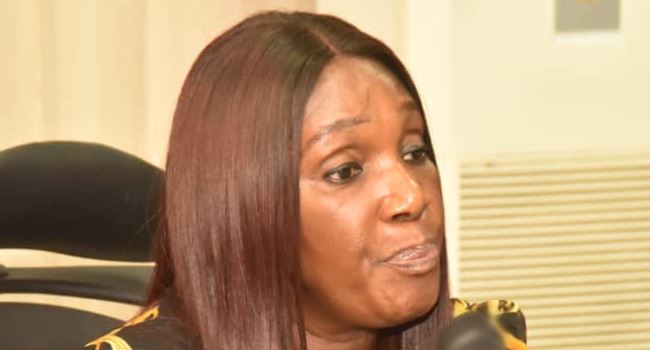 The former Managing Director of Niger Delta Development Commission (NDDC), Joi Nunieh, on Monday said that she slapped the Minister of Niger Delta Affairs, Godswill Akpabio, for sexually harassing her.

She said: “I slapped him. He tried to come on me. I am an Ogoni woman and nobody jokes with us. I showed Akpabio that Rivers women do not tolerate nonsense.”

Nunieh made the revelations while fielding questions from a team of Arise Tv journalists on its programme, The Morning Show.

The former NDDC MD had been engaged in a war of words with the minister in the last few days with accusations and counter accusations on what transpired while she held sway at the interventionist agency.

Nunieh had told journalists after the final sitting of the Senate adhoc committee probing expenditures by the NDDC, that Akpabio, threatened her to do his bidding or be removed from office.

Akpabio however denied the allegation, insisting that Nunieh was removed from office because of insubordination and also because she lacked the re-requisite qualification to occupy the office, as she had no National Youth Service Corps, NYSC, discharge certificate.

The minister, who appeared on a television programme, said: “She (Nunieh) was not removed from office because of corruption. She was relived of her appointment because of insubordination. My minister (Niger Delta Affairs) that was supervising her commission (NDDC) sent her several letters, she never replied any and she said she was bigger than the Minister of Niger Delta Affairs.

“Akpabio never said she was removed because of corruption, she was removed from office because she did not show evidence of completing her NYSC, after we got petitions that somebody who has no NYSC certificate was allowed to head an important office as the Managing Director of NDDC. In response, she forwarded several letters, including letter from the Nigerian Law School and affidavit, which you can see do not add up,” he said.

In her accusations, Nunieh alleged that Akpabio told her on the day that her committee was inaugurated that she must always do his bidding.

“Madam MD, if you don’t do what l say, the same hand that l used in signing your letter is the same hand l will use to remove you,” she quoted Akpabio as saying.

She also alleged that she was instructed to write an official report to implicate the Chairman, Senate Committee on Niger Delta Affairs, Senator Peter Nwaoboshi, over alleged fraudulent contract awards and executions. The offence of Nwaoboshi was that he was opposed to the NDDC being run by an interim committee, but she said she rebuffed all such entreaties.

Nunieh said: “They did all manner of things to forcefully remove me from office.”