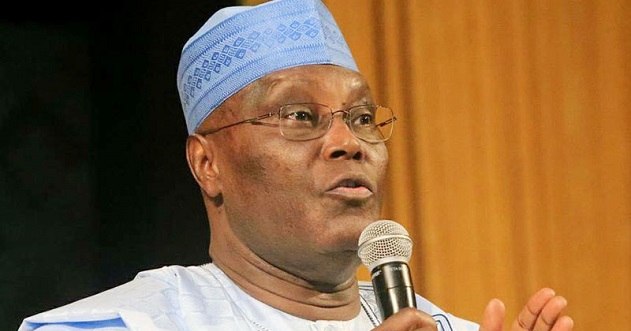 Former vice-president Atiku Abubakar and presidential candidate of the Peoples Democratic Party (PDP) says President Muhammadu Buhari would have ordered his arrest if he had evidence of corruption against him.

In a statement issued on his behalf by his campaign organisation, Abubakar said his emergence as PDP candidate has thrown Buhari’s camp into confusion.

He also dismissed the allegation of the Buhari Campaign Organisation that his victory was powered by vote-buying.

Abubakar said while he triumphed in a tightly contested race, such could not be said of Buhari.

“We are not surprised that there is confusion in the President’s camp. We expected that they would be thrown into a catatonic state knowing that HE Atiku Abubakar’s emergence automatically means the coming end of their ignominious reign,” he said.

“We ask how can the Buhari Campaign Organisation disparage the PDP Primary that produced His Excellency, Atiku Abubakar, when even the President’s own wife, Aisha Buhari, has condemned the APC’s primary? Not only did Mrs Buhari condemn APC’s primaries, but she also described them as ‘unfair’ and lacking in integrity. Who can know President Buhari better than his wife.

“Eleven aspirants contested against His Excellency, Atiku Abubakar, during the Presidential primary of the PDP. Every single one of them accepted his victory. President Buhari was the only candidate cleared by the APC to contest its primary, yet, a coalition of 5 aspirants are challenging his victory, that alone tells Nigerians his emergence is fraudulent.

“Nigerians know that Atiku Abubakar is the most investigated politician in Nigeria and any smear by the Buhari administration remains just that. With the vindictiveness of President Buhari, he would have arrested HE Abubakar if he had been found wanting.

Read also: ‘The choice between Buhari and Atiku is one between light and darkness’— APC

“However, to set the record straight, we want to remind Nigerians that PDP’s primaries were genuine, free and fair. Atiku Abubakar got 1,532 votes in a contest televised live to millions of Nigerians. The All Progressives Congress’ primary, on the other hand, was a study in dictatorship and corruption. The sole candidate, Muhammadu Buhari, scored almost 15 million votes. How could that occur without rigging or manufacturing of faceless voters?”

Abubakar said various acts of corruption were being committed under the current administration, which he said caused Transparency International to classify the country as more corrupt now than it was three years ago.

He said the choice before Nigerians was between a candidate who has provided over 50,000 jobs to people in his personal capacity and the other under whom 11 million Nigerians have lost their jobs.

“No wonder Transparency International rated Nigeria as more corrupt today under Buhari than just three years ago when the PDP was in power,” he said.

“The scandals are too numerous, including the $25 billion NNPC contracts awarded without due process, the several padded budgets, the $41 million Ikoyi Apartment scandal, the recall, reinstatement and double promotion of pension thief and Buhari financier, Abdulrasheed Maina, the N200 million grass cutter scandal, and many others too numerous to mention.

“The choice before Nigerians in 2019 is a simple one. Nigerians have a choice of electing a lively candidate with a record of providing 50,000 jobs to Nigerians in his private capacity versus the lifelessness (apologies to President Donald Trump) of a candidate under whom Nigeria lost 11 million jobs and became the world headquarters for extreme poverty.

“Nigerians have a choice of a man who will provide an efficient and business-friendly solution to the herdsmen crisis and a man whose government said ‘giving land for cattle ranching is better than death.”

“It is very obvious that faced with such a choice that Nigerians would definitely vote for the man who will Get Nigeria Working Again, hence we are not surprised by this desperate statement from the Buhari administration that is so shameless that they made a man implicated in framing a man of God on spurious charges as their spokesman. If he can lie against a man of God, should Nigerians believe anything he says about the PDP and its candidate?”