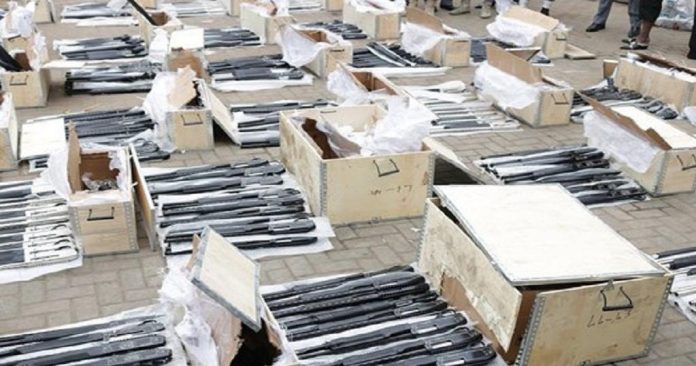 The Tin Can Island Command of the Nigeria Customs Service (NCS) has intercepted a 1x40ft container marked TRHU8058369, loaded with cartons of guns.

The development was confirmed by the Public Relations Officer of the Command, Uche Ejesieme, however, he didn’t make further disclosure as the Command was yet to brief the Comptroller-General of Customs, Col Hameed Ali, and the Zonal Office in Lagos about the development.

He said more information would be revealed after the top official of the service have been intimated with the development.

Ejesieme, meanwhile, confirmed that the container of guns was discovered during a routine examination at terminal B2 (Vehicle) of the Tin-can Island Container Terminal.

“The officers intercepted a container loaded with weapons, but as we speak, what we have done as a command is that we have written to the terminal to evacuate the container immediately to enforcement unit for 100 per cent examination so that we can ascertain the quantity and other relevant information.

“So, as we speak, we expect the terminal to evacuate the container to the enforcement unit where we intend to strip it, and the quantity, names of people involved, and other further information would be available.

“Most times, the suspect you see is those freight forwarders and agents coming for examination, but we are more interested in getting to the importer and everyone involved in that criminal importation to nip it in the bud,” he said.

Related Topics:CustomsLagos port
Up Next