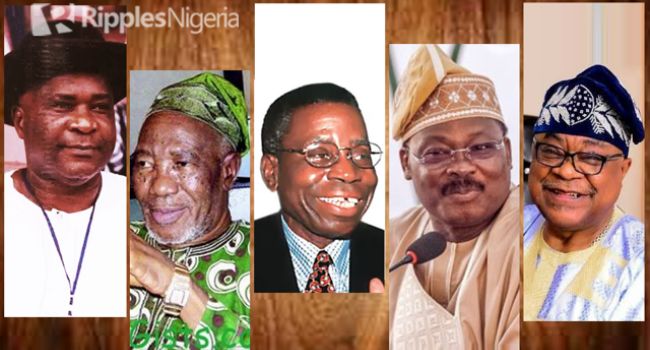 CLAIM
A viral post on facebook claims that five former governors of Oyo state, who are late, all died at 71 years old.

“Please how old is the current governor of Oyo state?

Someone just shared this with me but I don’t know how true it is, that:

FULL TEXT
The post which has been reposted and shared multiple times on facebook, claims that each of the listed former governors of Oyo state died at the age of 71.

Ripples Nigeria observed that while some commenters under the post questioned the veracity of the claim, others took it as fact.

This claim was circulated following the death of Chief Christopher Alao/Akala, a former governor of the state, who died at the age of 71.

The disseminators of this claim are giving the impression that it may be an ongoing trend of Oyo governors dying at 71 years old, hence the question: “how old is the current governor of Oyo state?”

VERIFICATION
Ripples Nigeria found this claim to be false, as only two of the past governors of Oyo State died at the age of 71. They are Chief Bola Ige and Chief Alao-Akala.

Chief Ige who governed the state in the second republic, was born in 1930, and was assassinated in 2001 in the city of Ibadan.

The other former governors did not die at 71 but at varying ages. Chief Kolapo Isola died at the age of 77. He lived between June, 1934 and August 2011.

Finally, Abiola Ajimobi died at the age of 70 in June 2020, reportedly due to complications from COVID-19 infection. He was born in December 1949.

FACT CHECK: Was Buhari elected via direct primary in 2015?