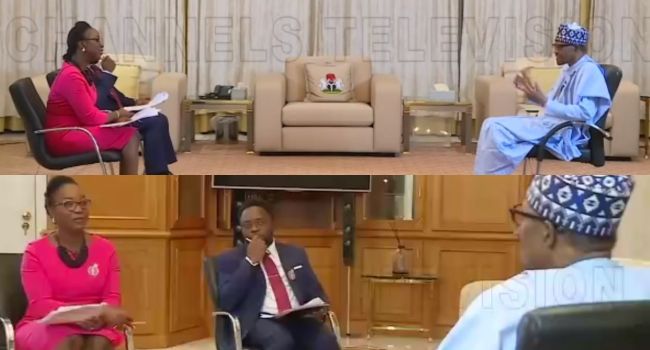 False. Buhari emerged the flag bearer of the All Progressive Congress in 2015 at an Indirect Primary election held in Lagos.

Mrs Ogun-Yusuf who was a co-interviewer of President Muhammadu Buhari in an exclusive interview with Channels Television, claimed that the President won his party’s ticket in 2015 through the Direct mode of primary election.

Mrs Ogun-Yusuf made the claim when querying President Buhari on his refusal to sign the Electoral Amendment Bill after it had been passed by the National Assembly.

The bill which was passed in November, 2021 proposes Direct election as the only approved mode of conducting primary elections by all political parties.

Buhari justified his refusal to sign the bill on the premise that Political parties should not be compelled to adopt a particular type of election in selecting their candidates.

Mrs. Ogun-Yusuf, during the interview, attempted to counter the President’s position by arguing the he, President Buhari got the APC ticket as a Presidential candidate in 2015 through Direct Primary.

“You as President, when you were contesting at the very first time as Presidential candidate of the APC (sic) direct primaries was what your party went with. Why are you now saying there are three options…

“You overthrew them (PDP), because you were able to emerge as the Presidential candidate of your party, and that was because of Direct Primaries.

“Do you think that you would have had a fighting chance if your party at that time had adopted indirect primaries?” she queried the President.

Channels Television is one of the most watched television stations in Nigeria. It also has about 1.8 million subscribers on its YouTube channel, many of whom would have watched the interview.

The interview was also rebroadcast by many national television stations, while there are Playback videos of the interview on various social media platforms, with cumulative views running into millions.

Ripples Nigeria reviewed past media reports to confirm if the APC had a direct or indirect primary election in 2015. The search revealed that the party had an indirect election.

A Direct primary election is one that gives all registered members of the party an equal opportunity to vote for any candidate of their choice. It allows party members at ward levels to participate and make a direct input in the primary election.

In Indirect election, the voters are selected delegates, who vote on behalf of members at the ward or state level.

The APC Primary election ahead of the 2015 general election held on December 10, 2014, at the Teslim Balogun Stadium in Lagos.

According to media reports, the election had about 10, 000 delegates drawn from the 36 states, and the federal capital territory.