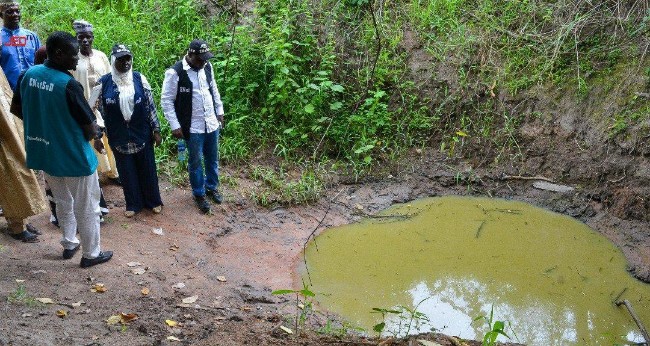 With a piteous voice and teary eyes, Isiaku Ajarat reflected on some of the challenges she had faced while trekking for about 10km to get water for her family’s daily use.

Ajarat, 60, was in her mid 20s when she married her husband, Isiaku, in Aroyehun town of Moro Local Government Area of Kwara state. She said she had seen couples divorcing, children running away from home and people losing their wards because of the challenges and hurdles one has to go through to get water.

Up until late December, Ajarat like many other residents of this village would have to leave her children at 2am in the midnight to Anido and Alapona’s ‘dams’ and few other but very far places to get water. Most of the time, they had to wait till another day before they could fetch a bucket in the very ‘small’ dam.

Each time they left in search of water, their husbands also moved with them to make way inside the bush and protect them from any harm. They would leave their children wandering around hungry, dirty and unattended to till God’s ordained time. Getting water comes with plenty of stress in these villages but they don’t care as long as they get a bucket to drink from for a day or days, sometimes.

Sometimes in the year, Ajaratu and other villagers would get a 50 litre jerry can for N300 from water vendors who transported their goods by bike. She could get as much as five Jerry cans in a day costing her the profits she got from her small business where she sells bean cake. This was yet another tough competition between residents that many would prefer trekking about 2km to get a Jerry can from the vendor’s makeshift depot for N300.

“There was a time we had to buy a jerry can of water for N300. Anytime we trekked to Anido to fetch from a dam, we would have to wait for eight hours or more to get a bucket because by the time the nearby villagers fetched from it, we would have nothing to fetch again except we wait for water to come up again. It might take as long as 10 hours before we returned back to Aroyehun.

“This period, we get battered with hunger and thirst. I don’t pray we experience it again”

According to a UNICEF report, Although about 70 per cent of Nigerians are reported to have access to basic water services, more than half of these water sources are contaminated. And although 73 per cent of the country’s population have access to a water source, only nine litres of water on average is available to a Nigerian daily.

Nine litres of water on average everyday is below the National average standard of 12 litres. It’s very poor in Aroyehun and some of these villages in Moro LGA as access to get five liters becomes a major reason people run away from home.

Equitable access to safe drinking water remains a challenge in Nigeria, with over 86 percent of Nigerians battling to get clean water to drink. The problem is compounded by poor drinking water quality and lack of equity in access.

Some years back, Mudinatu Imoru gave birth to a child in a very unhealthy position in late March. She was delighted for the new blessing but was quite sad because she knew she wouldn’t be able to cleanse her newborn baby until evening time. This positioned them for another journey in search of water. There was no water in Aroyehun and the neighbouring villages to take care of Modinatu and her newborn child.

Modinatu told this reporter that she could only bath her daughter with brownish water containing undissolved particles after five hours of birth without even minding the health implications. It was nonetheless a usual occurrence in their village.

Water from dams, streams and wells could be a serious threat to hygiene as WHO warned against drinking water in an environment that’s poorly sanitized. This water is believed to have been contaminated by microbes and can cause a serious health challenge.

Drinking water sources may contain a variety of contaminants that are associated with increased risk of a range of diseases in children, including acute diseases such as gastrointestinal illness, developmental effects such as learning disorders, and cancer.

Nearly half a million babies die in their first month of life each year because they are born into unhygienic conditions, a new WaterAid briefing revealed.

“When I gave birth around March, there was no water to bathe my child and myself. I couldn’t drink water, talk less of bathing until in the evening when some of the children in the village came with water from a dam in Iwo (about 6miles away). It was dirty with brownish particles but I didn’t care, She said.

Community with no evidence of government presence

The community of about 16 villages and more than 72 houses are predominantly dominated by Yoruba with presence of few  other tribes like Hausa, Fulani, and Nupe. They greatly rely on farming and charcoaling business to cater for their daily means.

This case of water scarcity is quite endemic but that’s just one of many problems in this community.

Aliyu Iyanda Aroyehun, the Alangua of the community, told this reporter that the community has been facing different threats due to bad governance and neglect for the past six decades.

Almost everything that makes life bearable cannot be found in Aroyehun and the neighbouring villages where residents say they live with no hope of a brighter future.

This made women divorce their husbands because of the lack of basic amenities as confirmed by sources interviewed by this reporter.

“Women divorced their husbands because of the lack of water and electricity. Most of them ran away to ilorin in search of greener pastures” Iyanda said.

Abubakar Magaji, a village leader in the Oyehun community, said their children have to walk 10 miles to attend school and travel to Malete to get medicines and medical attention from medical practitioners.

In cases where there are no cars or bikes to transport them to Ilorin or Malete, they depend on locally made herbs to treat themselves.

“Children of age 1-12 can’t attend school because they don’t have the strength to walk down to Malete. Most of these schools closed by 2pm but our children would end up getting home around 7pm in the night.

“If anyone is sick, we have to find means of transporting them to Malete or Ilorin (about 8miles or more away) to get treatment and this may even be a bigger problem. There’s nothing good about this village-no water (until last week), no electricity, bad roads. Nothing.

In a bid to reduce the sufferings of these people, a civil society organization, Elites Network for Sustainable Development (Enetsud) facilitated the construction of a hand pump and motorized borehole for residents of Banigbe and now Aroyehun community in mid of 2021, and late December.

When this reporter got to Diko, Banigbe and a few other villages, in Aroyehun Town of Moro LGA, he observed that the people were still suffering to get basic amenities like electricity and water. The only secondary school close to these villages was wrecked, and in a state of disrepair, with roofs and windows blown off. There were no ceilings and the entire school had only four classrooms available for more than 15 villages of more than 1000 children which were dusty.

Tunde, the bike rider who took this reporter to these villages said the school had less population of children because it was far and below standard.

He explained that, the school was now a playground for some of the neighbouring children.

“This is the only school in this vicinity. Very far to Malete. Despite being the only school, most parents don’t allow their children to attend class because it’s miles away, like Aroyehun to this place.

“This school is not even standard compared to most schools in Kwasu (Malete). This is all we got from the government after visiting us in every election period.

Another resident, Abdulkareem Abdulraheem could not resist the urge to abuse the state government when this reporter visited one of the villages in the LGA.

Abdulkareem is a farmer who has resided in Onyehun village for almost his entire life. He almost saw his wife leaving him to Ilorin because of the sadden state of his village.

“There is no electricity to power our accessories. Most of us don’t even use our phones. During harmattan or dry season, we won’t be able to work on our farm because there’s no water despite having a river close by”, he lamented.