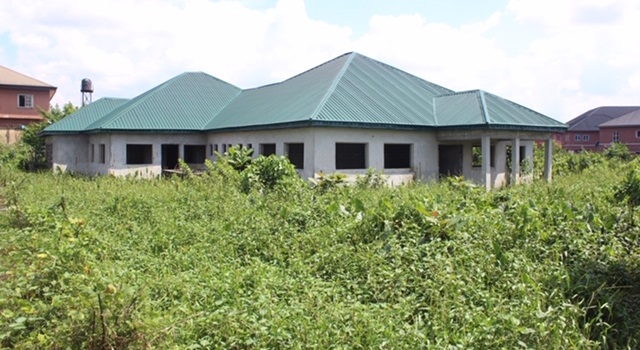 “In 2006, the Delta State government established the Delta State Oil Producing Areas Development Commission (DESOPADEC) to address the issues of lack of development in its oil-producing communities. Thirteen years later, many projects, including hospitals and health centres, contracts for which were awarded by the commission, have been abandoned. KELECHUKWU IRUOMA visited six oil-producing communities in Itsekiriland and reports.”

Oghoritsewarani Mene, 62, sits on a small wooden stool chair inside a kitchen frying fish she caught in the Excravos River in Delta State, in Nigeria’s oil-rich Niger Delta region. As she turns the fish, she steps back intermittently to avoid being splashed by hot oil from the small pot.

Inside the kitchen was her young grand daughter washing dishes. As the reporter stood at the kitchen entrance, Mene turned backward. Her eyes were red like fire. She looked sick, which she said could be caused by air pollution due to Chevron Corporation’s oil production activities in the Escravos River.

She has not been able to access adequate treatment due to the lack of health centre in Madangho, one of the riverine communities in Escravos, from where Mene hails.

“We don’t have a hospital in the community. The health center they built does not have the equipment and health workers to treat the people,” she said bitterly as she quickly went to put down the pot on fire.

The health centre block has been completed and roofed, but there is no equipment. The people of Madangho are poor and they manage to fish to feed their families. They are not buoyant enough to foot hospital bills, or go to Warri for treatment. Hence, the need to provide a functioning health centre to cater for their medical needs.

Chevron runs a mobile clinic, under which its health workers visit the community once a week to administer drugs to those who are sick. That is how Mene has been able to receive temporary treatment but she is not satisfied. “The day they [Chevron’s doctors] come, they only give medicine and go back,” she said. 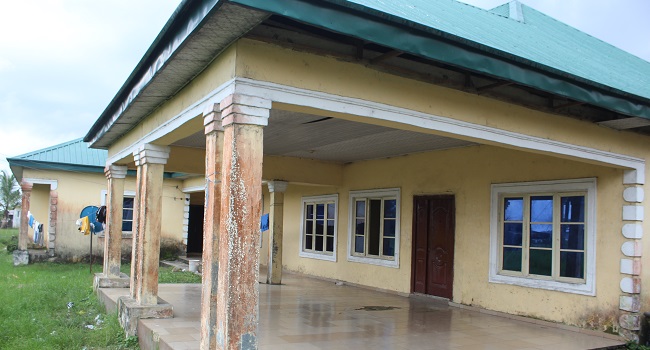 “We want a hospital in our community,” she said. “It is so painful that as a big community, we do not have a hospital. If something happens to someone, he will be stranded. We don’t have a boat that will carry us to Warri or Sapele. We are just dying here.”

Getting to Warri or Sapele with a boat ride is about two hours.

A document produced by the National Association of Itsekiri Graduates (NAIG) and the Movement for the Protection and Development of Iwere Homeland and History (MPIHDH) to commemorate the first coronation of the Olu of Warri, Ogiame Ikenwoli, in 2016 and titled “The Odyssey of Waste: A case for Itsekiri Development Master Plan” revealed that DESOPADEC awarded the contract of N59.4 million for the construction of primary health centre in Madangho to Aplamatuse Ventures.

When a detailed search was conducted on Aplamatuse Ventures on the portal of the Corporate Affairs Commission (CAC), the company was not seen.

According to the World Health Organization (WHO), only about 20% of the 30,000 PHC facilities across Nigeria are working. Nigeria, the most populous country in Africa, has not achieved Universal Health Coverage (UHC) for its people.

Effective delivery of healthcare services requires the availability of adequate infrastructure, diagnostic medical equipment, drugs, and well-trained medical personnel. But where health centres exist, they cannot operate because of a lack of basic amenities due to inadequate funding and financial mismanagement by leaders.

According to the National Primary Health Care Development Agency (NPHCDA), a primary health centre should have one or more doctors, a pharmacist, a staff nurse, and other paramedical support staff to provide outreach services. It should also have a well-equipped open ward, labour room, children and female wards, doctor’s office and staff quarters, an ambulance for referrals and drugs and equipment for immunization, preventive and basic curative care.

All the above is what DESOPADEC has failed to provide for the various oil-producing communities in Delta State. 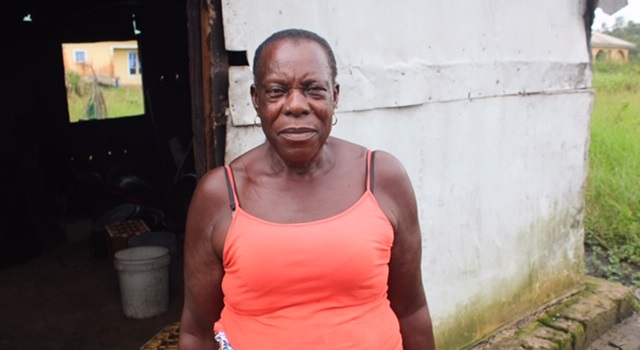 Oghoritsewarani Mene wants her community to have a functional health centre

Besides the abandoned DESOPADEC health centre project in Madangho, there are several other abandoned and uncompleted health centers and hospital projects across the oil-producing communities.

When the reporter visited Obodo community in Warri, the health centre constructed by DESOPADEC has been abandoned. It is surrounded by bushes. The community youths had to get sticks to clear the bushy part for it to be accessed.

Also, a contract of N25.8 million was awarded to Emitoj Nig. Ent. for the landscaping, fencing, and construction of a generator house for the health centre.

The projects have also been abandoned except for the fencing, which has been completed.

When a detailed search was run on Elscomas and Emitoj on CAC portal, the two companies were not seen.

Lyon Amaju, the community youth chairman said the people are not happy that no health centre exists in the community.

“If our people fall sick, we have to look for vehicles or keke that will convey them to the general hospital in Warri, which is about 10 kilometers away. That is a risk we are taking. If we have a functioning health centre, it will be a huge boost.”

Amaju said the board of DESOPADEC visited the abandoned project in July this year and promised to equip and make it functional in three months. It is December, Amaju said the commission is yet to commence work on the site.

“I am appealing to the board of DESOPADEC to come and finish the project for us. We have lost a lot of lives because we don’t have a health centre. We have written a series of letters but they have not done anything yet.

At the Egbokodo community in Warri, the primary health centre constructed has not been completed, but abandoned for over three years, according to the community leaders. The surrounding is bushy and impassable.

DESOPADEC awarded a project for the construction of the primary health centre at N59.6 million to Franvour Inpest Nig. Ltd.

Franvour whose office is located in Warri, Delta State is owned by Franklin Eyikimi, Favour Eyikemi and Anthonia Eyikemi. Efforts to reach the company for comment were unsuccessful.

“We need such a health centre here as quickly as possible to help us to alleviate malaria and every other health challenge,” said Eric Amorighoye, the treasurer of the community development council. 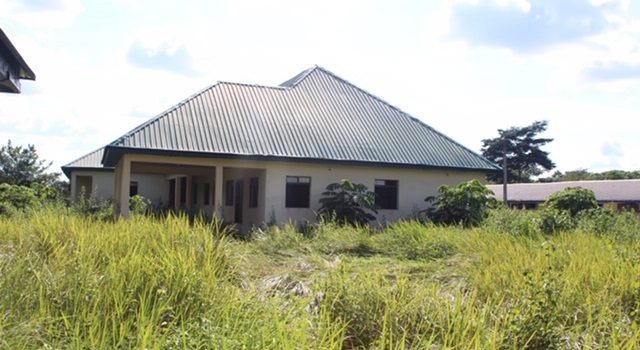 Amorighoye said Egbokodo has been marginalized with no reasonable and functioning health centre built by the government. Indigenes of the community rather visit private clinics and the general hospital in Warri town.

Emmanuel Ajisha, a youth leader in the community is not happy that the health centre project has been abandoned by DESOPADEC. He wants it fixed and well equipped so that medical practitioners can be stationed to work there for the benefit of the people.

Ogidigben is a neighbouring riverine community to Madangho. It is one of the largest communities in the Escravos area. Yet, the massive cottage hospital built by the government is under-equipped.

A visit to the hospital was met with no activity there. The pathway and the facility has been taken over by bushes. No doctor, nurse or patient was found in the hospital. The doctor and a nurse who usually go from Warri were found in their living quarters. Only the two medical practitioners work at the hospital.

The nurse, who refused to identify herself, said she was tired of working in the hospital as there are no medical items available to treat patients. If people are sick, there is no way to run blood tests for diagnosis. They have to refer them to laboratory centres in Warri or Sapele. The ceiling and standing fans are not working. All the wards are empty with few beds.

After constructing the health centre block at Egbokodo, DESOPADEC abandoned it

When a detailed search was run on the company on the CAC portal, the company was not seen. Johnbull Ojogbo, a leader in the community, said he was not aware DESOPADEC awarded a contract to furnish and equip the hospital.

“The hospital is functioning, just to equip it and we need more hands. Now that it is supposed to be equipped, DESOPADEC should do it. It is the community that is paying for security. DESOPADEC has not worked here. We are not seeing anything they have done here,” he said.

In Koko community, the story is the same. DESOPADEC-awarded projects at the Koko general hospital and Koko health centre have been abandoned and uncompleted.

Parts of the fence of the Koko general has collapsed, the surrounding is covered by bush. People have to step on shrubs to pass through. The pathways are also flooded. DESOPADEC awarded a contract of N58 million to Ajuetsi Nig. Ltd for the sand filling of the Koko General Hospital. Documents obtained by the reporter showed that N42 million was paid initially to the contractor but the project has not been done. A search on CAC portal turned up nothing on the company. 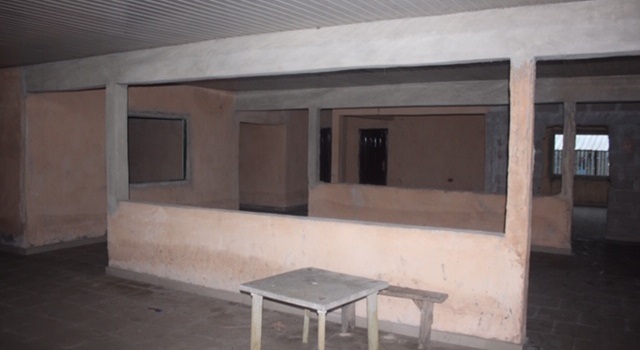 As a result, no car can go into the hospital premises because it is flooded.

The commission was meant to construct and equip a maternity ward for the general hospital but the projects have been abandoned. It is only the maternity block that has been completed. It has also been roofed but has no windows, doors and equipment.

Royals-Penn Concern was awarded the contract with the sum of N41.5 million but was paid N23.1 million to commence work. Another contractor, Ricgban Nig. Ltd. was awarded N40 million to furnish and equip the maternity block.

Details of Royals-Penn was found on the CAC portal. The company was incorporated on December 7, 2009, with the registration number: 857624 and owned by Iyayi Roli Kpenosen and Ogborifo Evelyn. The company carries on business as building and civil contractors, building and maintenance works, electrical and mechanical contractors, building constructions, property and estate developers, procurement and roads and bridges builders, erosion control, sewage and ware-house general supply of building materials, thinner, adhesives, welding materials, foams, abrasive and paints.

Ricgban, on the other hand, is a construction company incorporated in April 2000 with 378140 as registration number. Findings showed the company is owned by Endurance Omagbemi Igban, George Oyechobor, and Andrew Igban Omagbemi.

At the primary health centre in Koko, the gate was locked. There was no way to access the premises. The health centre building with the green roof was visible from the Koko Road leading to the Warri-Benin expressway.

Besides the construction of the block, a contract of N21.2 million was awarded to Gold and Millar Solution Limited by DESOPADEC for the fencing and landscaping of the health centre. A search on the CAC portal revealed the company was incorporated in April 2010 and owned by Imilar Agoritsedere and Imilar Nwalokomobi Mary-Frances, with an office in Lagos.

Another contract to furnish and equip the health centre was awarded to Ricgban Nig. Ltd. Both contracts have not been executed.

Wilberforce Akarodashen, the youth leader in Koko, said DESOPADEC has failed in its responsibility of providing medical services for the people to access quality healthcare services. 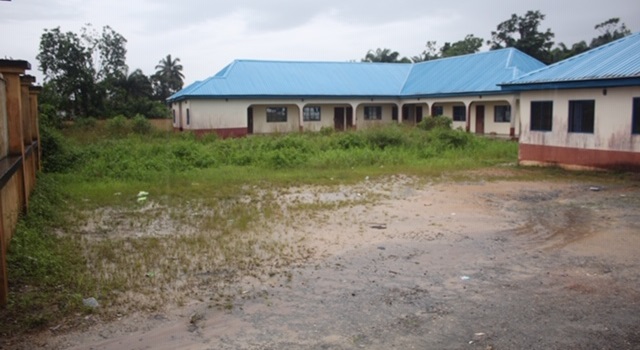 The fence and gatehouse are needed because the primary health centre was surrounded by houses so there is a need to protect it.

“People are living there temporarily. When DESOPADEC is ready to complete the project today, the community will vacate them,” said Kally Ariogua, the youth public relations officer of Ugbolokposo. 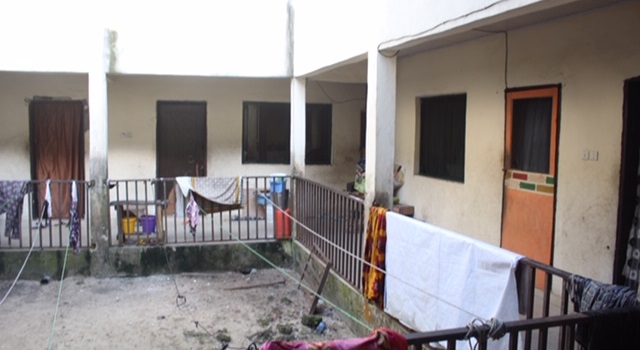 DESOPADEC’s Chairman, Michael Diden and the Executive Director on Projects, Daniel Mayuku, refused to speak to this reporter concerning the commission’s abandoned health centre projects in some of the oil-producing communities in Itsekiri.