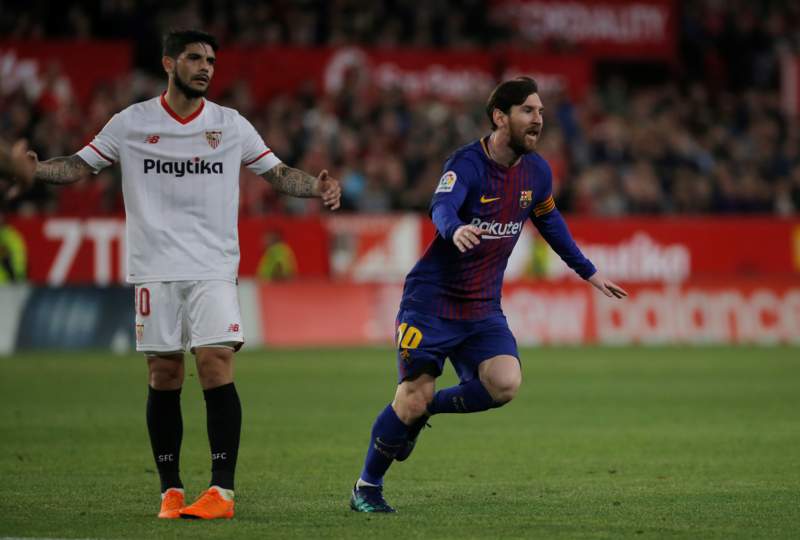 Two late goals by Luis Suarez and Lionel Messi helped Barcelona escape a first La Liga defeat of the season as they came from 2-0 down to draw at Sevilla on Saturday night.

The hosts had taken a 2-0 lead through Franco Vazquez and Luis Muriel in the 36th and 50th minutes respectively but wasted a string of chances to increase their lead.

Messi had missed both of Argentina’s friendlies during the international break because of injury and was left out of the starting line-up for this game.The Argentine then came in in the second half for Ousmane Dembele.

Suarez pulled a goal back from close range in the 88th minute and Messi equalised moments later from outside the area.

Barca maintain their unbeaten run in the league this season, and will host Serie A side, AS Roma in the UEFA Champions League quarter-finals next Wednesday.

Earlier on Saturday, Real Madrid moved to within a point of second-placed Atletico Madrid with a comfortable 3-0 victory at Las Palmas.

Cristiano Ronaldo and captain Sergio Ramos were both rested for the game and it was left to Gareth Bale to get the job done against their lowly La Liga opponents.

The Wales forward opened the scoring which was followed by Karim Benzema’s converted penalty, before Bale also converted a penalty to seal the win.

Real will travel to Turin on Tuesday for their Champions League quarter-final first leg against Juventus.