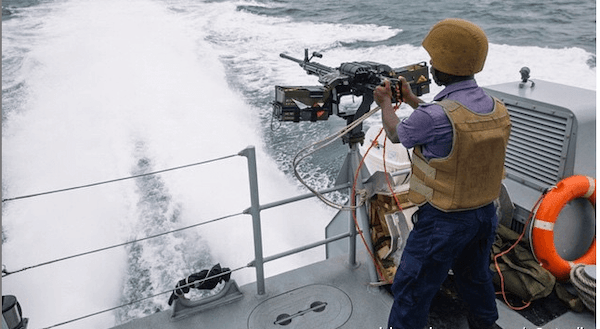 The smugglers were arrested with 370 bags of contraband rice.

The Navy Commanding Officer (FOB) in Ibaka, Captain Toritseju Vincent, who handed over the suspects and bags of 50kg rice to the Nigeria Customs Service on Thursday, said the Navy had made consistent arrests of illegally smuggled rice in its drive to fulfill its anti-smuggling patrol functions.

“Our continuing drive and one of our major functions in the Nigerian Navy is anti-smuggling patrols, and with our cooperation with the Nigeria Customs Service, we have consistently made arrests of illegal smuggling of rice from Cameroon into Nigeria.

“So an arrest was made on Monday, the 12th of August 2019 of these five suspects with a large wooden boat conveying 370 bags of rice. I want to use this opportunity to thank the Customs for the continuous and unwavering support to curb this menace.

“On behalf of the Flag Officer Commanding the Eastern Naval Command, I hereby hand over these 370 bags of the illicitly smuggled rice to the Nigeria Customs Service,” he said.

Receiving the suspects and the seized rice from the Navy, Chief Superintendent of Nigeria Customs Service (NCS), Akwa Ibom State, Olutola John, commended the Navy for supporting them in the discharge of their duties.

He promised that the Customs will continue to support the Navy in the drive to end smuggling on the waterways and assured that upon the completion of investigations, the suspects will be charged to court.

He said, “I, Chief Superintendent of Customs, Olutola John, on behalf of Area Controller, Eastern Marine Command, Port Harcourt hereby thank the Nigerian Navy for complementing the effort of Nigeria Customs in this command in doing its legal business activities in this area.

“I want to seize this medium as well, that our full cooperation with the sister security agency will always be there to end the illegal business activity and influx of smuggling into the country.

“I can assure the public as well that as soon as the investigations are being completed, the suspects will be charged to court, and the goods will be forfeited to the Federal Government of Nigeria”.

One of the suspects, Robin Sunday Robin from Mbo local government area of the state, said he was hired as a water bailer to bring in the smuggled rice from Cameroon.

He stated that it was his first time as a water bailer and he was not aware that bringing in rice from Cameroon was against the law.

“I was hired as a water bailer by the owner of the rice, Mr. Chimezie to go to Cameroon and bring his rice for him. On my way back, I saw a navy gun boat. I was arrested after I told them I was carrying 370 bags of rice.

“They took me down to the navy base and locked me. This is my first time of being hired as a water bailer and I did not know that bringing in rice from Cameroon is wrong,” he said.