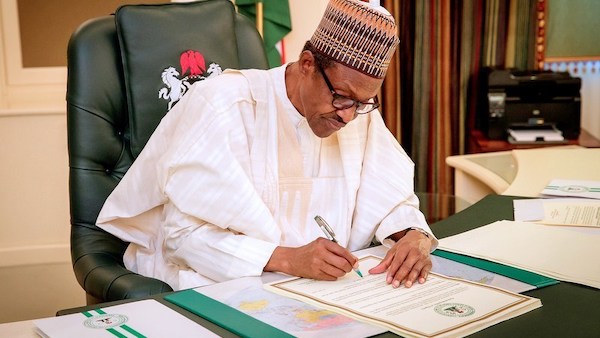 Roughly three months after the presidency transmitted the draft Finance Bill to the National Assembly for legislative scrutiny and approval, final assent came its way this morning as  President Muhammadu Buhari signed it into law, signalling a major shift for the Nigerian economy.

The culmination of this event was President Buhari’s statement which read: “this is the first time, since the return of democracy in 1999, that a Federal Budget is being accompanied by the passage of a Finance Bill specially designed to support its implementation, and to create a truly enabling environment for business and investment by the private sector.

“I thank the leadership and members of the Ninth National Assembly for the hard work and support that have gone into the passage of the landmark Deep Offshore and Inland Basin PSC Amendment Bill, and the Finance Bill; both vital to the successful implementation of the 2020 Budget.”

Beyond its relevance to the successful implementation of the 2020 budget, the new fiscal law carries the enormous potential of defining the direction of the Nigerian economy in the years ahead. Fully implemented, Its benefits to business are huge, its positive implications for trade and investment are sweeping. And there is no getting away from the import of the fiscal law as an economic game-changer for the private sector, where several outrageous fiscal policies have crippled investments and growth for years.

Corporate bodies in the country have had to confront the high incidence of regressive taxation fruitlessly; the promise that the new fiscal law will now check double taxation of companies is a cheering one.

It is fitting that the new fiscal framework is most favourable to small-scale businesses and the cottage industry considering that they constitute perhaps the largest percentage of the Nigerian labour force. Henceforth, businesses in this category have been exempted from paying tax.

The new tax regime equally hands out a considerable relief to medium scale enterprises whose turnover falls between N25 million and N100 million in the form of tax cut from 30% to 20%. This is significant. For companies that pay their taxes within the 90 days before due date, there is the possibility of getting a bonus of between one and two per cent. The Nigerian government has also upped the threshold of online transfers liable to stamp duty from of N50 from N1,000 to N10,000.

In  an apparent move to shore up tax revenue in some sort of counterbalancing act given the cuts, a new tax has been introduced to generate income from foreign entities involved in digital transactions with significant economic presence in Nigeria.

Recent improvements notwithstanding, Nigeria has not particularly fared well on the global Ease of Doing Business Index with the country taking the 131st position among the 190 economies surveyed in 2019. But hopes are high that the new fiscal regime will change the narrative to a certain degree.

Largely, the new fiscal law is a strategic government blueprint conceived to achieve a large-scale economic expansion by providing an environment that is profoundly favourable to business. The idea is to stimulate rapid growth in the number and size of firms that will in turn represent means for government to amass revenue to fund its programmes.

On the flip side, consumers will bear the major brunt of the overall negative impact of government’s aggressive fiscal plans. Despite offering an array of perks to business, trade and investment, government in its wisdom has chosen to shift the tax burden to consumers through a tax increase that has lifted Value Added Tax (VAT) from 5% to 7.5%.

It is envisaged that this move will impact consumer spending significantly and may trigger an upward trend in inflation as prices of most Fast Moving Consumer Goods (FMCGS) are bound to rise. By the same token, the new VAT policy will take its toll on household income as the possibility of drop in the value of discretionary income is huge.

All things considered, the new fiscal law calls for cautious optimism among Nigerians.

Sometimes less is more; why Cardtonic’s mobile app may just be unnecessary