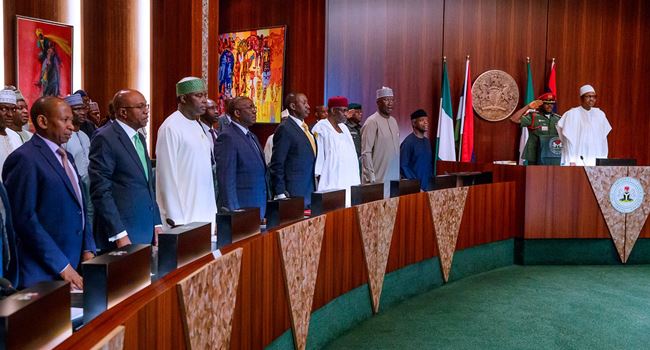 A clash between the Federal Government and state governors may be in the offing after a report emerged at the weekend that governors of the 36 states of the federation are considering the idea of having their monthly shares of the revenue allocation paid in dollars.

While the governors are pushing for payment of their monthly revenue allocation from the Federation Account in foreign currency some federal government officials are not favourably disposed to this idea and are unwilling to present it to President Muhammadu Buhari who has vowed to protect poor Nigerians from the vulnerabilities of the nation’s economy.

THISDAY reports that these government officials believed full deregulation of the downstream sector of the oil industry which would lead to “uncapping petrol price” would be injurious to the ordinary Nigerians.

One of the governors said at the weekend that given the negative reactions that had trailed the federal government’s quest for fuel subsidy removal, states must design a new strategy to deal with the problem of funding government activities, especially ones that affect the people directly.

He said: “States would get a better value for their shares from the Federation Account if federally-collected revenue, such as oil is distributed in dollars.”

Data from the Central Bank of Nigeria (CBN) showed that Nigeria netted a total of N5.54 trillion ($18.1billion) from oil revenue in 2018.

A breakdown of the figure showed that the revenue was earned through crude oil/gas sales, petroleum profit tax/royalties, and others.

This unfolding scenario may be yet another intriguing episode of the federal and state government clash.

Both had clashed last year after the federal government listed conditions for the release of the last tranche of the Paris Club refund to states, putting the outstanding at $2.689 billion.

A statement issued by the Director of Information at the Ministry of Finance, Hassan Dodo, said the ministry’s final approval of $2.689 billion of the Paris Club refund to the states is subject to certain conditions.

These include the states making the payment of salary and staff-related arrears a priority.

The issue of financial autonomy was another cause of discord between Abuja and the state governors.

The Nigerian Financial Intelligence Unit (NFIU) was mandated by the federal government to ensure that state governors don’t tamper with local government allocations from the Federation Account.

The argument was that the governors were not transparent in the utilization of local government allocations by bringing development to the grassroots and that was the reason President Buhari pushed for financial autonomy for local governments.