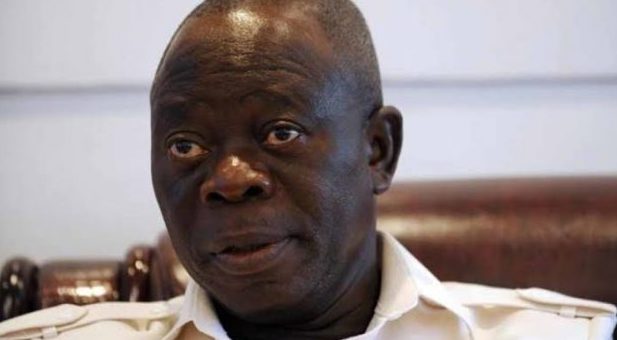 The National Chairman of the All Progressives Congress (APC), Adams Oshiomhole. on Wednesday advised the Edo State Commissioner of Police, Dan Mallam Muhammed, not to allow himself to be used as a tool in the hand of politicians.

Oshiomhole’s warning followed the police commissioner’s claim that his Benin residence was not attacked at the weekend.

Meanwhile, the state governor, Godwin Obaseki, had also insisted that the APC national chairman was never attacked as alleged and advised him to always observe protocols whenever he is in the state.
Oshiomhole, however, accused the police commissioner of downplaying the “very strong connection” between him and his home that was attacked.

In a statement signed by his Chief Press Secretary, Simon Ebegbulem, the former Edo State governor expressed surprise at the attitude of the police commissioner.

The statement reads: “I don’t want to believe that the Edo State Police Commissioner, Dan Mallam Muhammed, is gratuitously lending himself as a tool in the hands of some desperate and misguided politicians in Edo State whose pastime is to malign the reputation and public image of the National Chairman of the APC, Comrade Adams Oshiomhole.

“Apparently propelled by selfish interest, this tribe of politicians has unconscionably ensconced itself in the devious plot of feeding the people of Edo State with a misconstruction of the Comrade Adams Oshiomhole personal in order to galvanise negative public sentiments against him. Commissioner of Police Dan Mallam Muhammed has most probably been taken in by this political gambit of trivializing and rationalizing, by the way, he had done, an incident that had serious circumstantial implications for the safety of Comrade Adams Oshiomhole.

“I want to believe that CP Muhammed is a super cop, who should not contradict himself on the facts of a matter that was writ-large and about which his men were seized of. Who, for instance, were the people that pursued the thugs who came to attack Oshiomhole, thinking that he was at home when they struck? Of course, they were the policemen and some brave APC youths who got the information that the thugs had laid siege to the residence of Comrade Adams Oshiomhole with a view to attacking him.

“Was it not the CP that sent his men to the place to restore law and order? If the CP had claimed there was nothing like an attack, how come he decided to beef up security around the national chairman’s residence? I even read where the police claimed the people who went there were protesters.

“Are protests held in the night? The thugs laid siege to the residence of the national chairman of the ruling party at 8:00 p.m. My thinking is that by now the police would be telling us about the number of arrests that they have made. After all, the ‘suspects,’ purportedly pampered by the police, had regrouped at Edo Hotel after they had escaped from the scene. Why were they not arrested by the police at Edo Hotel? I know that the Edo State Government is making frantic effort to use the statement of the police commissioner that Comrade Adams Oshiomhole was not attacked to cover its evil plot and the shame it has brought to itself, but that effort had already fallen through in the face of a number of notorious facts.

“Some questions are therefore pertinent in the circumstance: Was the police expecting somebody to be killed in the attack on Comrade Adams Oshiomhole’s house before it would confirm that political thugs actually invaded or attacked the house? Suppose the Comrade Chairman had run into those thugs on his way back home without knowing about their presence, what could have happened? The answers are not blowing in the wind. They are right here. I leave well-meaning and perceptive members of the public with the answers.”