‘Put the past behind you, return to PDP,’ Fayose urges Ondo deputy gov, Ajayi | Ripples Nigeria 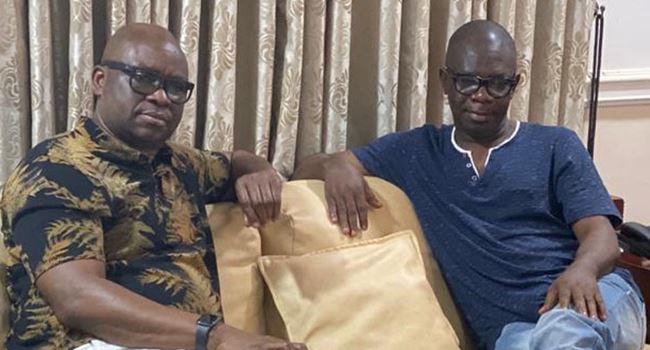 Fayose, according to a statement issued by his media aide, Lere Olayinka, made the call when he received the Zenith Labour Party (ZLP) candidate in last month’s governorship election in Ondo State in his Afao-Ekiti country home in Ekiti.

He urged Ajayi to put the past behind, focus on the future realistically, return to PDP and join hands with other leaders in the state to rebuild the party.

The ex-governor said: “It is important for him (Ajayi) to put the past behind him, return to PDP and join hands with other leaders in the state to rebuild the party.”

READ ALSO: ‘Tinubu has paid his dues. I will not join others to attack him,’ says Fayose

He described the deputy governor as a force to be reckoned with in Ondo politics, adding that Ajayi would thrive better in “a liberal political party like PDP.”

Fayose added: “What I can tell you like a brother is that the past should be put behind you and focus on the future realistically.

“The best option before you now is to return to the PDP and I am encouraging you to give it a consideration, because you need the party and the party too needs a strong political character like you.”

Ajayi dumped the All Progressives Congress (APC) for PDP in July after he fell out with Governor Rotimi Akeredolu.

He later quit the PDP for ZLP after he failed to secure the party’s ticket for the governorship election.

QuickRead: Lai’s bombshell, Lawan’s challenge; three other stories we tracked. Why they matter