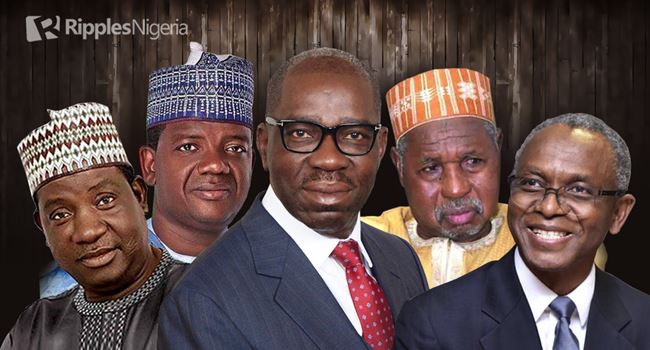 Ranking Nigerian Governors, a major offering of Ripples Nigeria, has entered its third year! After the first edition which was published in August 2019 as a medium through which performances, both in policy pronouncements and actual actions at the state level are weighted to see how administrations at that level have impacted on the lives of Nigerians on a monthly basis, the rankings have continued ever so thoroughly, expanding in reach and impact.

We, however, remain guided by the fact that governance in this part of the world is replete with challenges in carrying out this self-imposed duty, especially with the strict parameters set for rating state chief executives.

These challenges include fast-dwindling resources, worsening insecurity, and constitutionally-imposed limitations on the governors’ powers.

These do not however take away the fact that Nigeria is richly endowed with abundant human and natural resources and deserves to rub shoulders with the advanced countries of the world in terms of development.

We believe, most honestly, that Nigeria would not be the pariah state it is fast becoming if it were piloted by good leaders.

Recent happenings in the country, especially the fast deteriorating security situation, appear to have robbed Nigerian governors, just like the government at the centre, of innovative and impactful thinking, and the ability to provide quality solutions-oriented leadership.

We have observed also that state chief executives, especially in states hardest hit by the galloping insecurity, have resorted to pedestrian measures that have overtime failed and keep failing in every practical way.

We are appalled by the situation in Kaduna, Zamfara, Katsina and Plateau states and also taken aback by the simplistic ways the governors of these states have approached the situation.

Governor Bello Matawalle of Zamfara State, in his first few months in office, showed some promise as a proactive leader who was out to extricate his state from the dire situation bandits and other bloody criminals had put it. There was a semblance of peace, making Ranking Nigerian Governors applaud him on more than one occasion.

We are, however, in shock as to how such promising leadership has deteriorated so fast and so bad that the state continues to be in the news, practically on a daily basis, for mass murder and abductions. The situation in Zamfara is terribly concerning!

We are mindful of the fact that Matawalle, in his early days, obviously believed that pampering the bandits through negotiations could bring peace in the state. The anticipated peace has turned into a mirage, bringing instead, more carnage to the longsuffering people of Zamfara.

We are, however, still unable to fathom the latest resort to what we consider pedestrian measures by the state governor, exemplified by ordering closure of weekly markets, stoppage of sale of petrol in jerrycans, amongst others, to ostensibly stop the activities of bandits, who are in truth terrorists, making life a harrowing experience for defenceless people.

These terrorists, commonly referred to as bandits, are no marketwomen, neither are they subject to civil authorities or rules promulgated by them. It is then a wonder and shock that the governor thought closing weekly markets would stop the ongoing carnage in the state.

To show that the measures were pedestrian, the terrorists in large numbers on motorcycles invaded another school a few days after the order and on the same day and time Governor Matawalle was encouraging Zamfarans to go out in large numbers to defend themselves against bandits, abducting no fewer than 96 students.

It is our belief that the government at the centre and the state must show more strategic thinking and take proactive steps to permanently put an end to insecurity instead of engaging in measures that will make Nigerians the laughing stock among serious minded nations.

We wonder what these measures will achieve in the long run as they are too simplistic in every sense. Bandits are lawless people who are only out for destruction and for profit through their criminal enterprise.

We reckon that as long as governments at all levels fail to ‘speak the language they understand’, as famously espoused by President Muhammadu Buhari, Zamfara, Katsina, Kaduna and other states with the burden of banditry will not know peace.

The Plateau Debacle and Lalong’s Mess

The situation on the Plateau is troubling as both silent and large-scale killings continued almost unabated through July and August 2021, with fears of continuation.

Governor Simon Lalong had pretentiously showed himself as a man taking ‘proactive’ steps in controlling and curtailing the situation, though unsuccessfully, by declaring dusk to dawn curfew in some local government areas and 24-hour curfew in Jos North LG.

Before the Rukuba Road killings, the people of Irigwe, in Bassa Local Government Area of the state, had been crying to the government and security agencies to save them from suspected Fulani militias having a field day killing, maiming and destroying property and farms in the area. At the end of more than two weeks of attacks, about 70 Irigwe people were reportedly killed, about 550 homes destroyed, not counting farmlands, and more than 20,000 people displaced.

We consider Governor Lalong’s silence in the face of the Irigwe massacre a mess and the springboard for the Rukuba Road Killings. His slamming of curfew in the aftermath of the Rukuba Road killings is also pretentious and suspicious at the same time.

We are still at a loss as to why the governor failed to act when the first set of attacks on the Irigwe people took place. We are also at a loss as to why Lalong remained silent over the Bassa carnage, without even a visit to the affected area and without any word of consolation, until the situation got worse.

It is our belief that actions can only be said to be proactive and impactful if taken to prevent occurrence of evil or limit the damage to be done. This, Governor Simon Lalong of Plateau State has failed to do. ‘Fire brigade approach’, as is currently witnessed in Plateau and many other states in the country, will only make the nation’s security problems worse.

Obaseki’s No Vaccine, No Admittance Order

Governor Godwin Obaseki of Edo State stirred controversy when he proclaimed that residents of the state who failed to take the COVID-19 vaccine would be denied the right to attend public gatherings, including attendance of church or mosque services, marriage ceremonies and all such other public gatherings that involve crowds.

This order has brought up conversations that tend to put the governor in a precarious position, throwing him up as an authoritarian leader without respect for basic human rights.

Though we acknowledge the severity of the COVID-19 pandemic and its effects on both human resources and the economy of the country, we, however, believe that issues of vaccination, health and medication preferences of citizens cannot just be legislated upon and ordered by fiat.

We consider the governor’s insistence on the order, even after a court of competent jurisdiction had ruled against it, as undemocratic and totalitarian in nature and approach. It is an assault on the authority of the judiciary, and an onslaught on the freedoms of worship, movement and association, which are basic rights granted residents of Edo State by the Nigerian Constitution.

It is even more concerning that the Governor could make such an order when it is obvious that Nigeria does not have the number of doses that can go round every citizen eligible for the vaccine, which is said to be those 18 years old and above.

We counsel Governor Obaseki to be more persuasive in his desire to have every Edo State resident vaccinated. Public education and enlightenment, in a persuasive manner, should do, and not forcing things down the throat of the populace.

Related Topics:#featured2021AugustjulylalongMasariMatawalleObasekiRANKING NIGERIAN GOVERNORS
Up Next