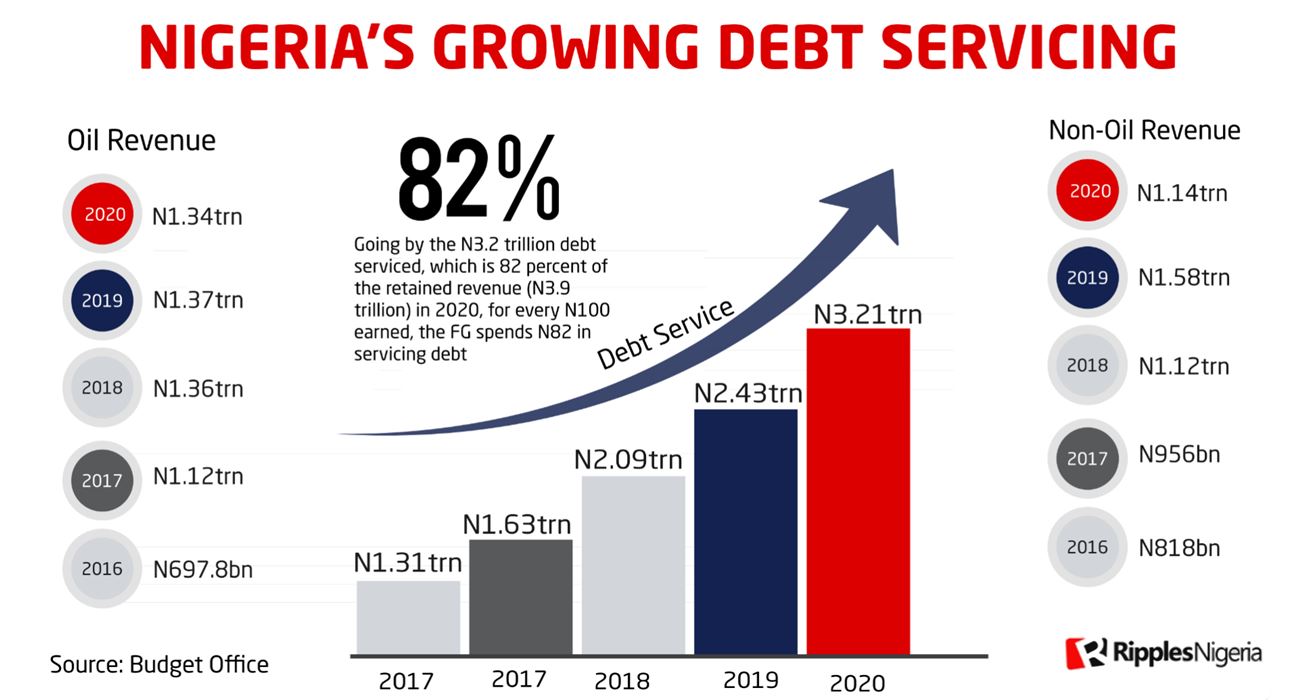 In 2020, Nigeria spent N3.2 trillion paying its debt. The Minister for Finance, Zainab Ahmed disclosed this during a public presentation of the 2021 FGN approved budget on Tuesday.

According to data from the presentation, the federal government retained revenue was N3.94 trillion, 27% short of the N5.36 trillion proposed target.

Out of which oil revenues generated was N1.52 trillion, while non-oil tax revenues totalled N1.28 trillion.

By implication, going by the 3.2 trillion debt serviced, which is 82 percent of the retained revenue (N3.9 trillion) in 2020, for every N100 earned, the FG spends N82 in servicing debt.

On Thursday, the National Bureau of Statistics revealed that, Nigeria’s total debt increased by N6 trillion to N32.22 trillion as of September 2020 from N26.21 trillion of the corresponding period of 2019.

A breakdown shows that external debts accounted for 37.82% (N12.19 trillion) of the total debt stock, while domestic debts at N20.04 trillion represented 62.18% of the total.

From all indication it seems, Nigeria’s hopes of ending this fiscal storm may not recede anytime soon as government plans to borrow more in 2021.

Read also: RipplesMetrics: For an average Nigerian, it’ll take 69 years to earn a Senator’s one month salary in 2021

Already, the Minister of Finance, in her budget presentation disclosed plans to borrow N2.34 trillion in addition to the $1.5 billion approved loan request from the World Bank.

Plans are also in place to tap into funds in unclaimed dividend funds and dormant accounts.

Ripples Nigeria had also reported $1.2 billion loan from Brazil to “revitalise Agriculture” through “The Green Imperative”.

The matured loans repayment scheduled from January to December 2021 according to figures published in the World Bank Debtor Reporting System.will cost the country an average monthly pay of $179,686,000(N68.4 billion).

The problem, however, with Nigeria’s borrowing is the piling interest rates which could make Nigeria’s debt even more expensive.

Tejvan Pettinger in his paper posited a long held agreed economic theory, which states that rising debt as a share of the economy would drive up the amount of money governments must pay in interest to borrowers. Hence, in Nigeria’s quest to offset debts, she would have to borrow even more.

In essence, Nigeria’s loan creditors, like the World Bank and the Exim Bank of China, could demand higher interest rates to hand more cash to an indebted borrower.

But for a miracle, it is a long road to freedom for Nigeria as it will continue to fund its debts against the critical socio-economic needs of the population.