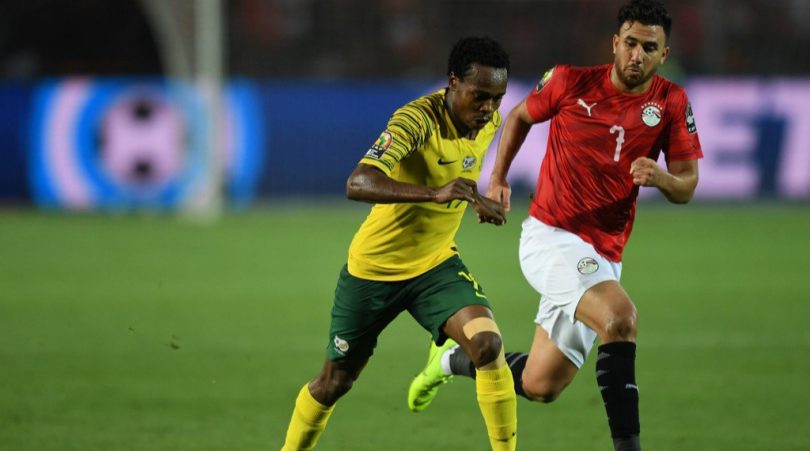 The host team of the 2019 Africa Cup of Nations, Egypt have been knocked out of the competition by South Africa in a thrilling last-16 encounter.

After a goalless 85 minutes, which saw several chances created by both sides, the Bafana Bafana secured their place in the quarter-finals with a stunning late goal.

South Africa did put up a superb performance against the hosts, with Thembinkosi Lorch scoring the only goal of the match in the 85th minute.

The Stuart Baxter men will now take on the Super Eagles of Nigeria, who saw off Cameroon earlier on Saturday, in the quarter-finals next Wednesday.

The hopes of Mohamed Salah winning the Nations Cup in his home land has been crashed as the Liverpool star was kept in check throughout the game.

Salah’s Egypt were finalists in the last edition of the tournament hosted by Gabon in 2017, where they lost in the final to the Indomitable Lions of Cameroon.

Egypt, considered favourites of the title, won all three of their group games, but got beaten by a South Africa that reached the last 16 as one of the four best third-placed teams.

The record seven-time champions of the continent crashed out of their own tournament after a seesaw struggle was settled when a swift counterattack allowed Lebo Mothiba to send Lorch through and he fired past goalkeeper Mohamed Elshenawy.

Teams already into the last eight of the AFCON include, Senegal vs Benin Republic, who will square up July 10th, and Nigeria vs South Africa, who play next Wednesday.