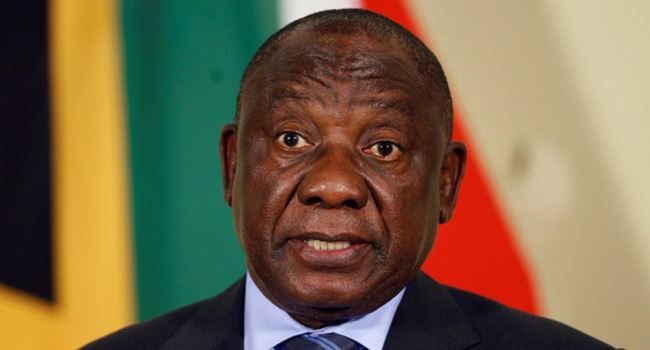 South Africa’s President Cyril Ramaphosa is currently facing impeachment threats after a report by an independent panel appointed by the Speaker of the parliament, Nosiviwe Mapisa-Nqakula, found evidence that he had violated his oath of office following a lingering scandal that rocked his Phala Phala farm.

The three-man panel was set up in September and tasked with ascertaining whether there was sufficient evidence to show that Ramaphosa committed a serious violation of the constitution or the law or grave misconduct.

The panel report which was handed to parliament on Wednesday recommended that Ramaphosa should face further scrutiny on his ability to stay in office.

“In all the circumstances, we think that the evidence presented to the Panel, prima facie, establishes that the president may be guilty of a serious violation of certain sections of the constitution,” the report said.

“These include not reporting a theft at his farm directly to police, acting in a way inconsistent with holding office and exposing himself to a clash between his official responsibilities and his private business,” it added.

While Ramaphosa had confirmed that a robbery occurred at his farm, he has insisted that the cash was from proceeds from the sales of game. He has denied breaking the law or any regulations relating to his office.

The panel report is coming weeks before an elective conference that will decide if Ramaphosa will get to run for a second term on the governing African National Congress’s (ANC) ticket in the 2024 polls.

The parliament, in a statement on Thursday, said it will examine the report and decide whether to push ahead with impeachment proceedings next week.

Ramaphosa has however, denied any wrongdoing and says he has not been charged with any crimes.

“I categorically deny that I have violated this oath in any way, and I similarly deny that I am guilty of any of the allegations made against me,” Ramaphosa said in a statement issued by the presidency.

The President’s travails began in June when a former South African spy boss, Arthur Fraser, filed a complaint indicating Ramaphosa of covering up a robbery at his farm where an estimated $4m cash was stolen by armed robbers.