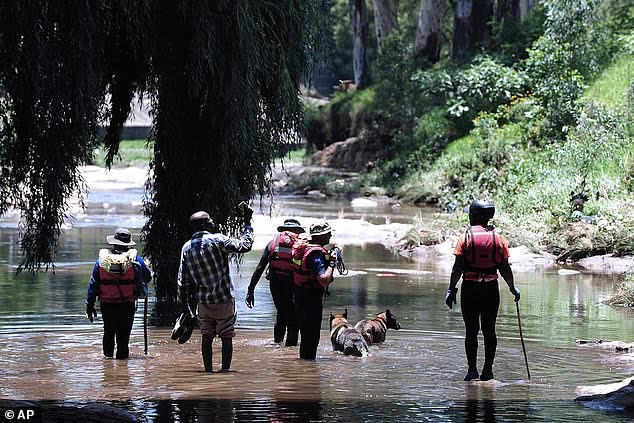 Not less than 14 people have been confirmed dead while an unspecified number are still missing after flash flood from the Jukskei River in Johannesburg, South Africa, swept away worshippers during a church ceremony, rescue officials said on Sunday.

Spokesman of the City of Johannesburg Emergency Management Services which is coordinating the search and rescue operations, Robert Mulaudzi, said a group of 33 worshippers had joined church rituals on the river banks when the flooding struck on Saturday.

“Some of the more than 30 congregants were standing on rocks in the river for the religious rituals on Saturday when a torrent of water surged through,” he said at a press conference.

“The pastor was saved after he clung on to an overhanging tree branch as he was being carried away,” he added.

“We had initially recovered nine dead bodies as at Saturday but on Sunday, we discovered five more bodies, making it 14 dead.

“Religious groups frequently gather along the Jukskei River, which runs past townships such as Alexandra in the east of Johannesburg, for baptisms and ritual cleansing.

“Officials have warned residents about the dangers of conducting the rituals along the river.

“We have been receiving a lot of rain on the city of Johannesburg in the last three months, and most of the river streams are now full.

“Our residents, especially congregants who normally practice these kinds of rituals, will be tempted to go to these river streams.

“Our message for them is to exercise caution as and when they conduct these rituals,” he added.

As at Monday, rescue workers and firefighters were still searching for the missing people, with emergency services indicating the chances of finding them alive were fading.

Related Topics:South Africa worshippers
Up Next