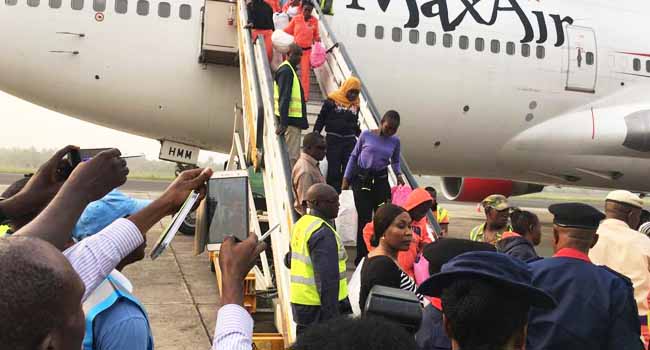 No fewer than 173 Nigerians that were stranded in Libya on Tuesday returned home.

They were received by men of the National Emergency Management Agency (NEMA).

The Returnees who arrived the country in two different flights were received by NEMA’s Coordinator, Lagos Territorial Office Alhaji Idris Abubakar Muhammed at the Cargo Wing of the MMIA, Ikeja.

It was gathered that the returnees were flown into the country in a chattered flight belonging to Al Buraq Air with flight number BRQ189.14 and registration number 5A-DMG.MRA.

It was also learnt that 52 of the returnees were adult females; four female children and four female infants as well as 106 adult males.

The profile report indicated there were two male children and five male infants in the batch.

Among the Returnees, 21 had medical challenges.

A Returnee, Miss Areni Aishat, 23 years old, from Ogun state said she was deceived with the promised of traveling to New York City in the United States with the opportunity to practice catering.

She said: “I just graduated as a catering apprentice and the Aunt told me that she can help me to travel to United States where I could do better work.

“She told me that she would pay for my transportation and that I would refund the money when I start working there.

“I did not know that she was deceiving me until we left and embarked on long journey.

”It was my mates that revealed to me that it was Libya we were heading when she started making trouble that it was United States she was promised.”

Miss Areni said it was when she got to Libya, she was told that there’s nothing like catering job.

She said she was told that the options available to her were either to be a house girl or to be sold out to Connection House that was a prostitution network.

She said she worked for one year.

“I decided to return home because the nature of the work is not ideal for a human being.”

“Nigeria is far better than Libya, Libya is dangerous, it is either you are kidnapped, killed, raped, robbed or bombing here and there. Nigerians are not safe there.”

Aishat stated that she was tired of staying in Libya and revealed how she was able to join this batch back to Nigeria.