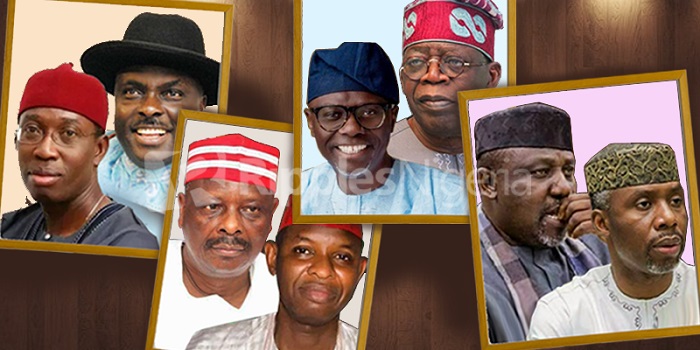 Here is a look at how political godfathers, their godsons and in-laws– whom they supported to come to power– fared during the 2019 elections.

Obasanjo and Atiku: A myth ended

Though, strictly speaking, the relationship between Former president Olusegun Obasanjo and his former vice Atiku Abubakar is not one between a godfather and a godson, Obasanjo is something of a national political godfather. Historically, he has earned the reputation of a kingmaker of some sorts, because it is believed that whomsoever he anoints for the highest office wins, and for good reason.

He backed the late Shehu Shagari to succeed him in 1979 and he won against the likes of the late sage Obafemi Awolowo and statesman Nnamdi Azikiwe. He anointed the late Musa Yar’Adua to succeed him as President in 2007 and he won. He endorsed former President Goodluck Jonathan’s presidential ambition in 2011 and he emerged victorious. In 2015, he endorsed President Muhammadu Buhari and he won the then incumbent President Jonathan.

However, in the recently concluded presidential election, his anointed, Atiku Abubakar of the Peoples Democratic Party (PDP), lost to President Buhari of the All Progressives Congress (APC). This is the first time a presidential candidate endorsed by Obasanjo will lose. It appears Obasanjo’s endorsement does not automatically translate to victory after all! The myth is ended.

Saraki and Atunwa: A dynasty sunk by a local revolution

Bukola Saraki, as a political godfather in Kwara State supported his political godson, the governorship candidate of the PDP in his state, Hon. Razak Atunwa, but he lost to the incumbent Governor, Abdulrahman Abdulrazaq, of the APC. He also lost his bid to return to the Senate. Ibrahim Oloriegbe, of the APC, defeated him – a defeat which sent cold chill down the spine of many. The political misfortune of Saraki was largely attributed to the O To Ge (Enough is enough) movement which swept the state like wildfire. The slogan was meant to extricate Kwarans from the hold of the Saraki political dynasty and it worked.

Tinubu and Sanwo-Olu: No end in sight to the reign of the King of Bourdillon

The former governor of Lagos State and National Leader of the APC, Asiwaju Ahmed Bola Tinubu, is the political godfather of Lagos State. He has a strong influence and wields much power in dictating who becomes a governor in the state. After his two terms as governor in the state (1999-2007), he ensured Babatunde Fashola – now Minister of Power, Works and Housing – succeeded him.

He was also instrumental to the coming of Akinwunmi Ambode as the governor of the state in 2015. It could be recalled that Tinubu, stood against the second term bid of Governor Ambode. He eventually lost the party ticket to Babajide Sanwo-Olu – Tinubu’s favoured candidate – at the APC party primaries. Sanwo-Olu went on to win Jimi Agbaje, of the PDP, in the March 9 governorship election. This tells how powerful Tinubu is in Lagos State politics. It could be recalled that Tinubu played an integral role in bringing President Buhari to power in 2015.

Okorocha and Nwosu: A tale of heartbreak and hope deferred

This is not the best of times politically for the outgoing governor of Imo State, Chief Rochas Okorocha, of the APC. The governor has been roped in a lot of political mess, lately. As a political heavyweight in the state and a sitting governor, he supported Uche Nwosu, who married his daughter, Uloma, in 2013, in the Imo State governorship race. Nwosu, who is also the Chief of Staff to Okorocha, lost the APC primaries to Senator Hope Uzodinma. Thus, he defected to the Action Alliance (AA) to pursue the Imo governorship seat.

Okorocha fell out with the National Chairman of his party – APC – because of this outcome. He later did what was considered a betrayal to the party when he went ahead to support his in-law, Nwosu, who was a standard bearer of another party in the governorship race. Okorocha’s in-law lost to the former deputy speaker of the House of Representatives, Emeka Ihedioha, of the PDP.

As Okorocha’s dream of having his in-law, Nwosu, as his successor fell like a pack of cards, his mission to clinch the senatorial seat of Imo West senatorial district suffered a bit of a setback. The Independent National Electoral Commission (INEC) Returning Officer for his senatorial district, Prof. Innocent Ibeawuchi, alleged that he was forced to declare Okorocha the winner of the senatorial poll by supporters of the APC. Ibeawuchi said, “I was compelled to announce the result which was inconclusive. I am a man of integrity and it is not true that the governor slapped me but I was held hostage by agents working for him (Okorocha). I was manhandled and I thank God I came back alive.” Based on this premise, the INEC did not issue a Certificate of Return (CoR) to Okorocha.

Okorocha’s senatorial ambition, at the moment, is hanging while his aim to install his in-law as the governor – of Imo State – did not work out for him. Moreover, he has since being suspended from his party – the APC – by the National Chairman, Comrade Adams Oshiomhole, for alleged inter-party affairs.

Akume, Jime and Ortom: A broken triangle of influence

In Benue State, former two-term governor (1999-2007), Senator George Akume, of the APC, is a political godfather who exerts tremendous influence in the political terrain of the state. He is believed to have enabled the emergence of the two successive governors after him, Gabriel Suswam and Samuel Ortom. But in 2019, he crashed on all fronts.

Akume, who is currently representing Benue North West senatorial district in the 8th Senate, lost his bid to return to the senate to incumbent House of Representatives member, Emmanuel Orkev Jev, of the PDP.

His anointed candidate for governor, Emmanuel Jime of the APC, also lost to incumbent governor Ortom of the PDP. The political godfather, who was the Minority Leader of the Senate from June 2011 to June 2015, is almost headed for political irrelevance in the next four years, except a national intervention from his party at the centre alters his fate.

Ortom, a former godson of Akume, has, it appears, successfully ended his reign as godfather of Benue politics.

Ibori and Okowa: A controversial but productive alliance

Such was Ibori’s influence that he was said to have determined Okowa’s emergence as governor in 2015, while in detention in the UK. In 2019, now fully at home, Ibori pulled out all the stops to ensure Okowa defeated his perennial foe, Great Ogboru of the APC.

In a Tweet, Okowa, on March 11, 2019, said, “I want to appreciate my leader, former Governor James Ibori for his encouragement, support and all through these years.”

Kwankwaso and Yusuf: A story of what might-have-been

Former governor of Kano State, Rabiu Kwankwaso, of the PDP, is a big political godfather in Kano. His Kwankwasiyya political fan club has a large following in Kano and other northern states. He did defect to PDP when he fell out with his former ally and successor governor Umar Ganduje, of the APC. Kwankwaso did not seek re-election into the Senate.

However, he anointed and supported the governorship candidate of the PDP, in the state, Abba Kabir-Yusuf – who is his son-in-law and former Commissioner of Works when he was governor of the state. In the just concluded governorship supplementary election – marred by wanton killings, violence, intimidation, vote-buying and the like – that held in the state, March 23, after the INEC declared the March 9 election inconclusive, Ganduje won Kwankwaso’s candidate, Yusuf. Kwankwaso’s endorsed National Assembly candidates also lost out. With this political misfortune hanging on Kwankwaso’s neck, he must be headed to a political obscurity.

The outgoing governor of Ogun State, Ibikunle Amosun, of the APC, just like Okorocha supported the governorship ambition of his political godson, Adekunle Akinlade, of the Allied Peoples Movement (APM) even when he is not contesting under the platform of his party – APC. Amosun, who won the senatorial seat of Ogun Central senatorial district, saw his godson lose the governorship election to Dapo Abiodun, of the APC.

While Amosun failed in installing his godson as the governor of Ogun State, he was also suspended, like Okorocha, from the APC for engaging in inter-party affairs.

Akpabio and Udom: The road to political oblivion

The former governor and political godfather of Akwa Ibom State, Godswill Akpabio, of the APC, who has been in a political tussle with his former political godson, Udom Emmanuel, whom he helped to ascend the governorship seat in 2015, lost his senatorial seat of Akwa Ibom North West to Engineer Chris Ekpenyong, of the PDP. Akpabio, who was once a Minority Leader in the Senate, also lost out in his bid to install Nsima Ekere, of the APC, as governor of the state. Akpabio’s political might in Akwa Ibom has dwindled drastically following these loses.

Wamakko, Tambuwal and Aliyu: The jury is still out on who the real king is

The governorship election in Sokoto State saw the display of power between estranged political godfather and godson, Aliyu Wamakko, of the APC, a former governor of the state and now a Senator, and incumbent governor, Aminu Tambuwal, of the PDP. Wamakko has an overwhelming following in the state. When Tambuwal defected from the APC to the PDP, his deputy, Ahmed Aliyu remained with the APC. It was alleged that he was acting under the influence of Wamakko. He, however, resigned from his position when he got the wind that he will be impeached by the PDP dominated state House of Assembly members. He was later replaced by Dan’iya.

During the governorship election in the state, Aliyu, contested under the APC. He had the backing of Wamakko, who won re-election into the senate, while incumbent governor, Tambuwal had the endorsement of former governor of the state, Attahiru Bafarawa. As the March 9 governorship election in the state was declared inconclusive by the INEC, a supplementary election which was conducted in the state on March 23 saw Tambuwal emerge as the winner of the election but only by 342 votes. Will his victory be upturned? Time will tell.

Godfatherism in Nigeria Should Stop

The issue of godfatherism dominates Nigerian politics. It is rare to find a politician vying for an elective position without having a godfather whom he/she answers to. This trend appears to be unhelpful to the populace as a godson who comes to power is naturally programmed to put the welfare of his/her godfather first and leave the people behind. When a godson can no longer fulfill the demands of his godfather, a disagreement between them always heats up the polity and puts the vehicle of good governance to halt. There is need to jettison the practice of godfatherism in Nigerian politics. It has never helped us.