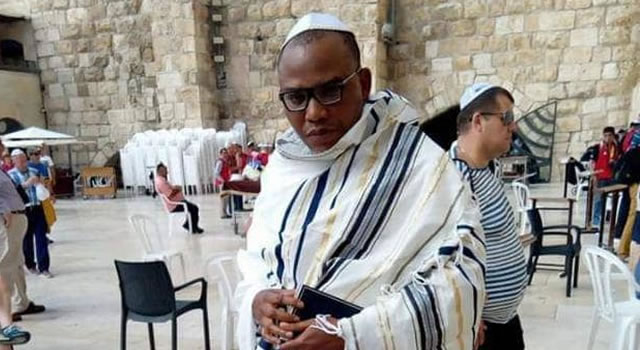 Ohanaeze Ndigbo Youth Council Worldwide has described as “an ill wind that will blow no one no good” the order for the re-arrest of fugitive leader of the Indigenous People of Biafra (IPOB), Nnamdi Kanu.

The order was given by Justice Binta Nyako of the Federal High Court, Abuja on Kanu who had since Nigerian soldiers invaded his home in Abia State in September 2017, fled the country and has not been attending his alleged treasonable offence trial in court.

Justice Nyako, had during his ongoing trial on Thursday, ordered that the pro-Biafra agitators’ leader be re-arrested for his continuous absence from court.

But responding in a statement signed by Mazi Okechukwu Isiguzoro, and Mazi Okwu Nnabuike, president, and secretary general of Ohanaeze youth wing respectively, the group called on President Muhammadu Buhari to as a father of the nation, instead grant Kanu pardon.

According to them, the arrest order has the potentials of spelling doom to the southern part of the country, especially the South-East.

The group said they received the arrest order with “rude Shock and disbelief, and weighing the implications, such action may destabilize the fragile peace that has returned to Southern Nigeria, especially Southeast and South/South after the ugly but sad experience(s) witnessed during his first arrest, and subsequently the untimely death of innocent Igbo Youths and women that characterized his detention.”

According to them, IPOB has to “resist any temptation of allowing Nnamdi Kanu to return to Nigeria, as the healing process of those slaughtered during the first arrest and python Dance has not been completed.”

The statement further read, “There’s no need to escalate the tension already established in the Southeast over the menace of herdsmen ravaging some parts of Igboland; there’s no need to compound our loss by allowing Nnamdi Kanu return now until Igbo Christian and Traditional leaders intervene in the process.

“We are pleading With President Buhari as the father of the Nation to grant Presidential Pardon to Mazi Nnamdi Kanu, as a way to show compassion to Ndigbo. We are aware of the Presidential release of over 500 inmates of suspected Boko Haram detainees in Kano Prisons.

“Presidential Pardon to all Biafra agitators, including Nnamdi Kanu will save a lot of billions of Naira that would’ve been used for peacekeeping, in the imminent collapse of peace and civil disturbances that will follow immediately if he’s re-arrested.

“Such billions can be used on alternative Road Projects in southeast, because Aba, Port Harcourt, Asaba, Abakiliki, Enugu, Onitsha, Nnewi and Owerri may become ungovernable as we witnessed during the last arrest of Nnamdi Kanu.

“There is no better time to re-unite every part Nigeria than now; Carrot and Stick method of late President Yar’Adua should be adopted in handling the delicate case of Nnamdi Kanu; his re-arrest order is an ill wind that will blow no one no any good.”