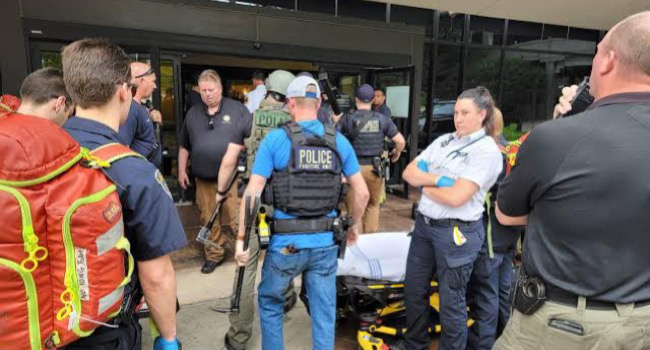 At least four people have been confirmed dead with scores injured in a mass shooting on Wednesday at a hospital campus in Tulsa, Oklahoma, USA, the Tulsa Police Department, said in a news conference.

The gunman, according to the report, also died from what the police believe were self-inflicted gun shot injuries.

The Tulsa Police Deputy Chief Eric Dalgleish who addressed the news conference, said “several people were also wounded, though no one has life-threatening injuries.”

The Department’s Police Captain Richard Meulenberg who also spoke on the shooting, said dispatchers received a call about an “active shooter at the Natalie Medical Building, a physicians’ office building on the St. Francis Hospital campus, shortly after 4:50 p.m. local time.”

“It’s a horribly tragic event. I’m very, very proud of the officers for getting there as quickly as they did, very well potentially stopping more people from losing their life today,” he said.

“Officers responded to the scene within minutes and made contact with victims and the suspect roughly five minutes later.

“The officers who arrived could hear shots inside the building, which directed them to the second floor.

“The scene is fairly limited to one section of that floor, on the second floor.

“At least part of the scene was in an orthopedic office on that floor. No officers were injured,” Dalgleish said.

“Investigators are interviewing witnesses that were in the building. One witness was found locked in a closet.

“Police are getting close to identifying the suspect who had one rifle and one handgun with him. It appears both weapons, at one point or another, were fired,” the deputy chief added.