Home » Politics » After losing out in 2015, Sen Lawan announces bid for Senate President in 9th Assembly 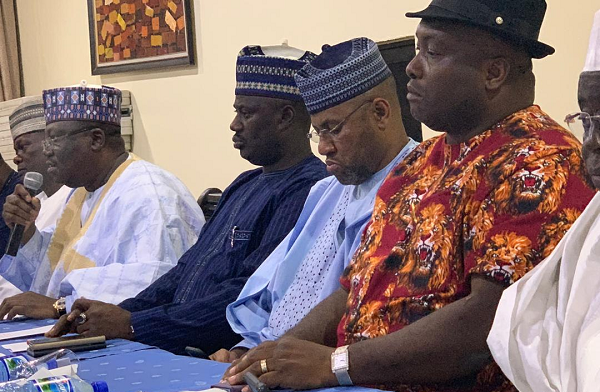 Senate Leader, Senator Ahmed Lawan, has declared his intention to run for Senate President of the ninth National Assembly, stating that the upper legislative chamber will be more vibrant under his leadership.

Lawan, who represents the Yobe North federal constituency, made this known while addressing newsmen in Abuja in the company of 10 other Senators-elect.

The lawmaker who belongs to the All Progressive Congress (APC), hinged his aspiration on the need to make the National Assembly pro-active, focused and quest for all legislators to work together.

Ahmad, who has been a member the House of Representatives from 1999 to 2007 and a Senator since 2007, emphasised that he was going to reach out to all Senators-elect across party lines over this objective.

READ ALSO: I don’t rig, I only influence elections with my ‘moral authority..’- Tinubu

He said, “APC senators in this respect are so critical because that is our focus. But we will also reach out to other senators-elect from other political parties. So, this is a representation. This is not the number of senators that are supporting this cause. This is just introducing ourselves to you”.

He further said that “it is very critical and crucial that we talk to our colleagues, convince them that we are the right people to lead the Senate and the National Assembly. “We take nobody for granted. We believe that the crop of senators elected this time will be such that can achieve much more in terms of uniting ourselves and focusing on the real issues of development, of making Nigerians experience very rapid and sustainable changes and transformation.

Lawan ruled out any crisis rocking the rank of APC Senators-elect over the election of presiding and principal officers of the 9th Senate saying, “we are not in any way thinking that we will start having some crisis”.

According to him, “we are not even praying that that happens but our party, the All Progressives Congress must have learnt its lessons. Therefore, I am sure the leadership of the party will do something differently.

“I am sure our leaders will try to manage this huge success of APC. and I have no doubt that the party will find us complaiant and very supportive of the programmes of our party and our administration under the leadership of President Muhammadu Buhari”.

While canvassing for a bipartisan legislature under his leadership, Ahmad however did not rule out disagreements over issues among the lawmakers.

His words: “We need to have a bipartisan chamber. We definitely will disagree from time to time because of party perspectives or something. But generally because we are senators of the Federal Republic of Nigeria, when we legislate, we do so for the entire country. And therefore, we need to remain united and focused.

“Whether you are APC or PDP or YPP, we have the same people to serve. So, we will work to ensure that we achieve and attain that desired unity within the chamber. There will be equity and fairness in our affairs. I am sure that once we are able to unite around national interest, we will contribute meaningfully to governance

“I was in the opposition for 16 years from 1999 to 2015. Even as an opposition, we knew where we would oppose and cooperate with the government. Take for example, the security of the country. Could there be any legislator who would oppose any legislation that would enhance the performance of our Armed Forces or Police to provide security? The answer is no”.

He stressed that his main focus upon emergence as Senate President will be to support the cardinal programmes of President Buhari through the enactment of quality laws for the progress of the country.