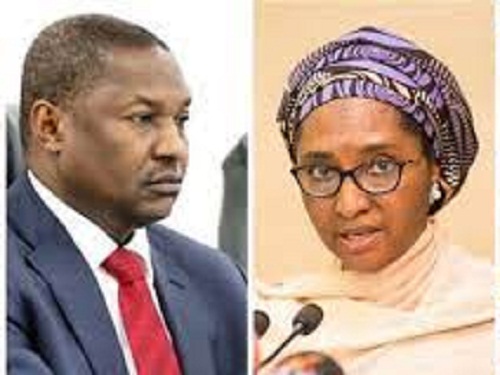 Minister of Justice and Attorney General of the Federation, Abubakar Malami (SAN) and the Minister of Finance, Budget and National Planning, Zainab Ahmed, have weighed in on the controversy generated by the collection of Vallue Added Tax (VAT) in the country.

While Malami has insisted that the Federal Inland Revenue Service (FIRS), will continue to collect VAT in the states following a ruling by the Court of Appeal on the matter, Ahmed wants the states, especially Rivers, that has taken the Federal Government to court on the matter, to tread with caution.

Malami, in an interview with the News Agency of Nigeria (NAN), in New York on Wednesday, said with the ruling of the Court of Appeal on the disagreement over the collection of VAT between FIRS and Rivers government, the collection still lies with the Federal Government.

“The position of not only the Federal Government but indeed the judiciary is the fact that status quo associated with the collecting of VAT should be maintained,” Malami said.

“The ruling of the Court of Appeal that the FIRS and the Rivers Government should maintain status quo favours the FIRS.

“And as far as the judicial system is concerned, the status quo as at the time the parties approached the court, it was the Federal Inland Revenue Service that was indeed collecting the Value Added Tax.

“So with that in mind, the Federal Government has succeeded in obtaining an order that establishes the sustenance of the status quo, which status quo is that the Federal Inland Revenue Service should continue collection.

“This is pending the determination of the cases that were instituted by states, particularly the Rivers State Government and the Lagos State government. The cases are being determined by the court”.

The nation’s number one law officer further stated that the FG was taking steps to consider the possibility of instituting an action before the Supreme Court for the purpose of having the matter determined once and for all.

Also speaking on the imbroglio that has emanated from the VAT crisis leading to several states in the south heading to courts to ensure they do the collection themselves, Finance Minister, Ahmed, appealed to the states to withdraw the cases as the the current economic situation in the country does not call for such litigations.

Ahmed, in a statement on Thursday, said the Nigerian economy was facing difficult times just like other countries due to the impact of the COVID-19 pandemic and as such, the federal government is facing revenue challenges and instead of states going to courts, “it was time for all hands to be on deck to pull through the difficult times together.”

She also reiterated the ruling of the Court of Appeal, saying by the ruling, all taxpayers in the country should “continue paying their VAT to the FIRS and for the FIRS to continue collecting VAT on behalf of the Federal Government in compliance with the VAT act.”

The Court of Appeal had on September 10, given an order that Rivers government and FIRS should maintain status quo on the issue of VAT collection after a court in the state earlier ruled that Rivers State should collect VAT in the state, and the signing into law of a bill vesting the collection of VAT on the state.

But on an appeal by the FG, a three-member panel of the Court of Appeal headed by Haruna Tsammani, issued the order which is being challenged at the Supreme Court by the Rivers government.

Related Topics:#featuredFIRSMalamivatZainab Ahmed
Up Next

Past govts reason we have to borrow so much -Lai Mohammed