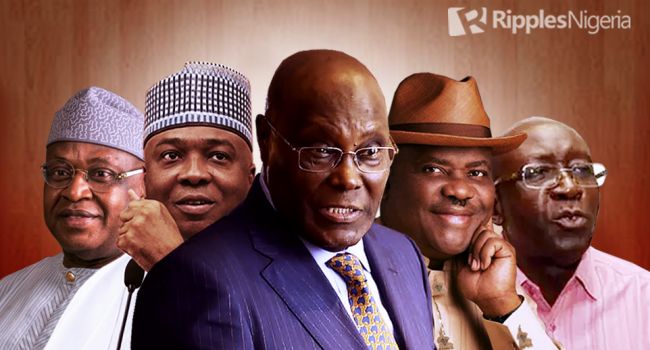 Before losing power in 2015 to the then major opposition party, the All Progressives Congress (APC), the Peoples Democratic Party (PDP) had touted itself as the biggest party on the African continent, and had predicted that it would remain in power for another sixty years.

The party had been in power for the whole of 16 years, and had become so used to winning that it threw caution to the winds and felt so relaxed with the false confidence that it could win any election just by contesting.

Indeed, at the return to democratic rule in 1999, the PDP was in control of the House of Representatives, the Senate, and also called the shots in 28 out of the 36 states in the country, plus the Federal Capital Territory (FCT).

But all that was to fizzle out as internal wrangling within its ranks, and poor handling of the Nigerian project, led to its defeat in 2015.

Today, the PDP has found itself as the major opposition party, with a spate of high profile defections and the loss of their once traditional strongholds to the APC and other parties.

Rising from the ashes

As the country looks forward to the 2023 general elections, and with many Nigerians currently disenchanted with the way the country is sliding politically and economically under the leadership of APC, the PDP is, once again, aiming to put itself out as an alternative party that could rescue the nation.

But yet again, fierce struggles over control of the party structure are threatening to derail the party’s quest for a return to the heart of Nigeria’s politics. Not even the removal of former party chairman, Prince Uche Secondus and the emergence of Iyorchia Ayu seem to offer any immediate hope of stability.

With that said, there are individuals who, many believe, wield enormous influence to shape the fortunes of the party, either for good or bad.

But who are these men and how will they shape the future of the PDP ahead 2023?
Let’s take a closer look at these influencers who may hold PDP’s fortunes in their hands.

Former Vice President Atiku Abubakar is one man who could change the fortunes of the PDP in 2023. Political analysts believe that whichever way Atiku decides to play, his larger than life image will affect the PDP in how things pan out in 2023, either for good or for bad.

Atiku’s desire to ascend the highest political office in the land is an open secret. Seen as a man with deep pockets, and who could deploy his massive wealth to influence outcomes, Atiku’s greatest burden is the fact that many people see him as a fair-weather politician, a serial defector with no serious ideological leaning, and constantly in pursuit of a narrow selfish agenda.

Since 2011, Atiku has had to move from the PDP to AC, back to PDP, then to APC, and back to the PDP again, all in his quest to become president. Still fresh are rumoured claims that he made moves to buy out delegates with money at the 2019 PDP presidential primaries in Port-Harcourt, Rivers State.

Many consider Atiku as emotionally detached from the PDP anytime the party is in turbulence. He has been accused of abandoning the PDP shortly after he lost the 2019 presidential election, allegedly allowing the party to bear the brunt all alone while cooling off in Dubai as the party tried to battle APC in court.

Another factor that could whittle down Atiku’s influence is the lingering issue of his nationality. Shortly before the 2019 elections, he was dragged to court on the allegation that he was originally from Cameroon and, therefore, not qualified to run as president of Nigeria.

The matter remains fully unresolved at the courts, and this has not been helped by a plethora of corruption cases that have continued to dog Atiku over the years.

Given the mood of the nation, especially as it concerns power shift to the south, Atiku’s quest for the party’s 2023 presidential ticket may ultimately hurt the PDP in 2023.

Rivers State Governor, Nyesom Wike, has become one of the most influential members of the PDP, and has stood up for the party in thick and thin.

Almost regarded as the lone voice of the party, especially from the South-South, Wike has taken on the Federal Government on several occasions and come out victorious despite his brash and sometimes, impetuous disposition.

In fact, he has become a reference point for not only the PDP but the entire opposition class who seem to shrink in the face of APC’s might. Most critics agree that he takes no prisoners whenever he decides to challenge the powers that be.

Wike has entrenched himself as, perhaps, the only PDP politician who deliberately carries on as an opposition figure, and is not afraid of taking on the President Buhari-led administration, even if it means being in the bad books of the federal government.

However, he has also constituted a stumbling block within the PDP, both at state and national levels, as he is wont to impose his ideals and ideas on the leadership of the party.

Close watchers of the polity believe that Wike is the major financier of the PDP at the moment and, indirectly, calls the shots no matter who the national chairman of the party is. He is rumoured to be the unseen hand behind the travails of Uche Secondus and the final nail that sealed his removal from office.

Many would also agree that he sufficiently wields enough financial muscle, being a Governor of one of Nigeria’s richest states, and pulls the strings when the need arises, including exercising the power to select and impose anyone he wants at the helm of affairs.

It has been suggested that if Wike pulls back his moral and financial support, the party may not have the wherewithal to survive in 2023.

Former Kwara State Governor and Senate President, Bukola Abubakar Saraki, is another member of the PDP who has the capability of either shaping the fortunes of the party positively or negatively in 2023.

Saraki is a well-groomed political boardroom guru having served as a state governor for two terms, between 2003 to 2011; before moving to the Senate in 2011 to represent Kwara Central district. He was elected as the 13th president of the Senate at the 8th session in 2015.

Part of Saraki’s baggage is the fact that he falls into the Atiku category of unstable politicians who defect from one party to the other whenever their personal interest is threatened.

Saraki joined the Senate as a PDP member in 2011 but by 2014, following a disagreement with the party, led a faction of the PDP to form APC.

In 2019, he contested for the PDP presidential ticket but lost to Atiku. He was to later become Director-General of the Atiku/PDP campaign team for the 2019 presidential election which failed to unseat incumbent president, Muhammadu Buhari.

As the 2023 general elections approach, Saraki has, once again, thrown his hat into the presidential ring. His acolytes have continued to market him as one who has what it takes to consolidate on PDP’s quest to get back into power due to his brutally incisive political mindset.

Though considered an asset to the party, Saraki’s consummation with the presidential project appears to position him as one only interested in advancing his personal interest and not the general good.

The clamour for the PDP to zone its presidential ticket to the South may ultimately derail his ambitions in the final scheme of things. Therefore, as it stands, his narrow political interests may not augur well for the fortunes of the PDP in 2023.

The emergence of former Senate President, Iyorchia Ayu, as the PDP Chairman on December 10, 2021 has been described as breath of fresh air by many of his supporters ahead of the 2023 elections.

The party’s National Working Committee (NWC) has been mandated to steer the ship of the party for the next four years but the major task is to shoulder the responsibility of returning the party to the centre come 2023.

Critics say that Ayu’s rise, without the usual rancour that often accompanied such contestations, holds out hope that the party would become stronger and more resilient to push the ruling APC to its limit with purposeful opposition politics.

But Ayu is likely to suffer many distractions, especially the huge loss in 2021 of three PDP governors to the ruling APC, and the challenge
of effectively managing the bloated ego of rival politicians who consider themselves best
qualified to pick the party’s presidential ticket.

No doubt, the office of party chairman holds so much power and promise, and Ayu may just have an ace up his sleeves. He could either choose to allow the rules of the game to prevail or deploy the powers accruing to his office to favour a particular candidate.

Despite the raised hopes, therefore, it may be too early in the day to announce Ayu as a saviour. He could actually become a spoiler.

Chief Dan Orbih’s presence may not loom very large in the nation’s power matrix but those who know him will testify to the fact that he is one politician whose commanding influence is being highly sought ahead of the 2023 permutations.

Seen as a quiet performer, Orbih rose to become the National Vice Chairman (South-South) of the PDP in March 2021. Since then, he has done so much to not only unite dissenting voices but position the region as the most influential zone in PDP’s power equation.

Even more so are his antecedents which are well documented. Orbih, as the former Chairman of Edo State chapter of the Peoples Democratic Party (PDP), built a formidable force that gave the Adams Oshiomhole-led administration a good run, and eventually saw it out of power.

Indeed, Orbih arguably stands out as the most accomplished state chairman of any Nigerian political party in recent memory, a feat that has greatly shaped the rising fortunes of the PDP in the South-South region.

It is no surprise that Governor Wike of Rivers State finds in him a reliable ally in the quest to ensure a power shift to southern Nigeria.

Orbih’s rising political profile and network, built over a 12-year reign, is the sort that cannot be ignored in any power game. In 2006, he was a member of the PDP Presidential Electoral Panel, and later, that of the PDP national convention held in August, 2013.

No doubt, the PDP power bloc in the South-South region owes much of its stability to the organizational skills of Orbih. The cohesion is surely a joker in the hands of this grassroots power broker.

Thugs attack Igboho’s residence in Ibadan, kill one, injure many

Why Buhari is reluctant to sign electoral bill – Wike