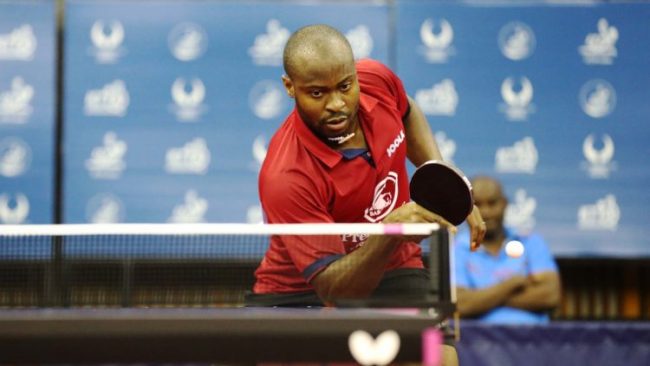 Nigeria’s table tennis superstar Aruna Quadri will join some of the best players in the world to aim for honours and ranking points at the ITTF World Tour tagged Hong Kong Open at the Queen Elizabeth Stadium in Hong Kong.

Already, the Nigerian has been listed among the 16-man seeding list for the $145,000 prize money championship in the Asian city.

Quadri who recently claimed the Portuguese league with Sporting is seeded 13th; Egypt’s Omar Assar has been seeded sixth while home boy – Ting Chun Wong is the number one seed.

Quadri and the other 15 seeded players will start their campaign from the main draw on Thursday May 24 while the qualifiers begin on Tuesday May 22.

A confident Quadri said he is hoping to finish among the best in the event. “I will try my best to do well and I hope my best will see me through because this is the assembly of crème-de-la-crème in world table tennis,” he said.

Also, Olympic Games gold medallist, World champion and winner of the Men’s World Cup, alongside colleague Ma Long are the only player to hold all three prestigious titles at the same time; but for China’s Zhang Jike, in order to reserve a place in the Hong Kong Open, he must succeed in the qualification tournament.

Home fans will be very much focus on Wong Chun Ting. He is the top seed in the Men’s Singles event. Furthermore, he partners Ho Kwan Kit in the Men’s Doubles competition where they are the no.3 seeds, behind Korea Republic’s Jeoung Youngsik and Lee Sangsu, the runners up earlier this year in Germany. Japan’s Jin Ueda and Maharu Yoshimura are the no.2 seeds.

Likewise, the name of Lee Sangsu is prominent in the Men’s Singles event; he is the no.2 seed, ahead of Japan’s Kenta Matsudaira, Portugal’s Marcos Freitas and Chinese Taipei’s Chuang Chih-Yuan. Egypt’s Omar Assar, Denmark’s Jonathan Groth and Germany’s Ruwen Filus complete the top eight names.

Korea Republic in evidence, it is the same on the Under 21 Men’s Singles order of merit, Lim Jonghoon heads the list, colleague Cho Seungmin is the no.4 seed; Japan’s Yuto Kizukuri and Germany’s Joe Seyfried are the players sandwiched in between.

However, all need to be aware of two names that could upset the seeding; Niu Guankai and Xu Haidong both appear on the listing.