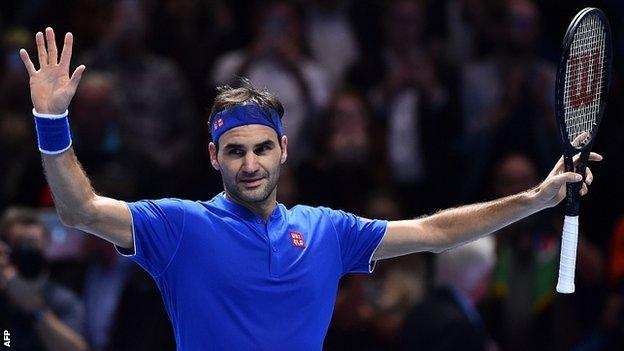 Roger Federer defeated Kevin Anderson 6-4 6-3 to emerge winner of the group and secure his place in the semi-finals of the ATP Finals in London.

By finishing at the top, the six-time champion boosted his chances of avoiding world number one Novak Djokovic in the last four of the competition.

Federer kicked off his campaign with a defeat last Sunday but bounced back with two successive wins to reach the semis for the 15th time.

“I’m very happy, my first match was tough and I never got going, but with my back against the wall maybe it’s easier for me to play,” the Swiss said after the win.

Read Also: VAR set to be used in Premier League next season

“Kevin’s had a great year, but it’s been a fun group and I’m very happy to be in the semis.”

In the group’s other game, Dominic Thiem defeated Kei Nishikori, but both players crashed out.

Top seed Djokovic is already through, and can clinch top spot in his group by beating Marin Cilic on Friday.

Alexander Zverev, John Isner and Cilic are battling for the other semi-final berth.

Related Topics:ATP FinalsRoger Federer
Up Next

VAR set to be used in Premier League next season