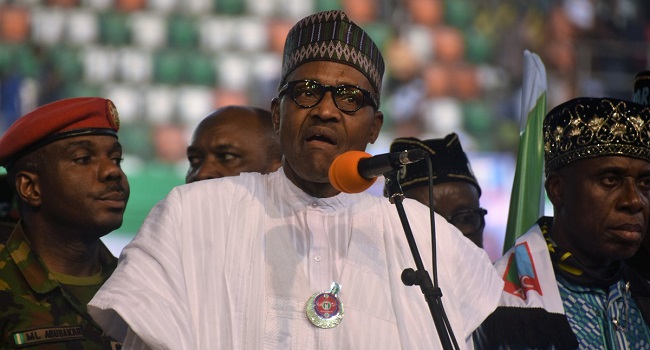 President Muhammadu Buhari says Boko Haram will be “a thing of the past” if he is re-elected by Nigerians in 2019.

Buhari also said he has delivered on his campaign promises in spite of doubts by the opposition.

He stated this on Friday in Uyo at the flag-off of the All Progressives Congress (APC) presidential campaign in the South-South geo-political zone.

According to him, Nigerians will not regret voting for APC candidates in 2019.

He said he had specifically delivered in the area of security, economy and fighting of corruption in line with his promise to Nigerians.

The president said although the menace of Boko Haram remained a challenge in some parts of the country, the insecurity posed by the group would eventually be eradicated.

He also said that although unemployment remained a challenge in Nigeria, this administration was working to tackle the problem.

He said that his administration had ensured food security and encouraged Nigerian farmers to achieve food security.

Buhari said that his administration would continue to fight corruption if voted into office for a second term in 2019.

“We are arresting corrupt people and prosecuting them and we will not stop. I assure you that we have collected property and collected cash.

“We have put the money into the Single Treasury Account (TSA) and all are going into government account which can be traced and accounted for.

“Nigerians will be informed from time to time how much we recovered and from who and how we are going to use it to develop the country,’’ he said.

He said that APC’s campaign was based fundamentally on three fundamental issues of enhancing the economy, ensuring security and fighting corruption.

He noted that Boko Haram had no stronghold in any local government area in Nigeria at the moment.