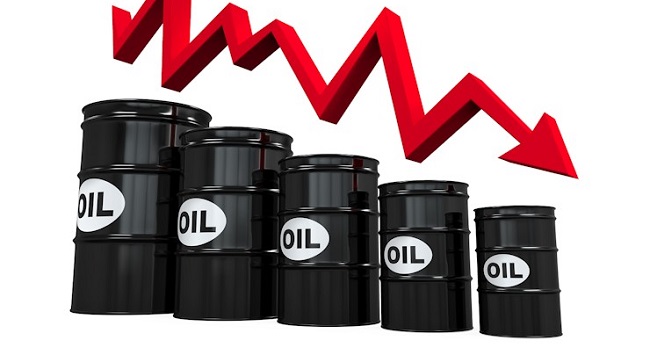 Nigeria may be heading for its second recession in nearly four years after crude oil prices crashed to $30 per barrel in the international market.

The fresh meltdown in the global oil market is expected to threaten the country’s 2020 budget implementation, especially funding of capital projects.

President Muhammadu Buhari had while presenting the 2020 budget estimate adopted a conservative oil price benchmark of $57 per barrel and daily oil production estimate of 2.18 mbpd

The oil prices crashed as much as 30 percent within seconds of the market opening on Sunday evening after Saudi Arabia launched an aggressive price war over the weekend, driving crude to its lowest level in four years.

Brent crude, the international benchmark, against which Nigerian oil is priced, dropped from $45 a barrel to $31.52 a barrel in one of the biggest one-day drops in its history.

The huge sell-off follows the collapse of Saudi Arabia’s oil-cutting alliance on Friday, with Russia refusing to make deeper cuts to output despite the sharp hit to demand from the coronavirus outbreak.

Saudi Arabia, Opec’s de facto leader, has responded by slashing prices and indicating it will instead raise output. The move is seen as an attempt to take on Russia as well as squeezing other high-cost producers out of the market, including parts of the US shale sector.

It is reminiscent of the attempt to win back market share in 2014 during the last price war, but this time it comes as demand is seen falling because of the impact of the coronavirus, which has crimped air travel and the wider economy.

“It is very rare for a demand collapse to coincide with a supply surge,” said Bob McNally at the Rapidan Energy Group. “It is the most crude price-bearish combination since the early 1930s. The price collapse has just begun.”

Goldman Sachs, one of the most influential banks in commodity markets, on Sunday lowered its price forecast for Brent to $30 a barrel for the second and third quarters, and warned there could be dips to $20 a barrel in the coming weeks.