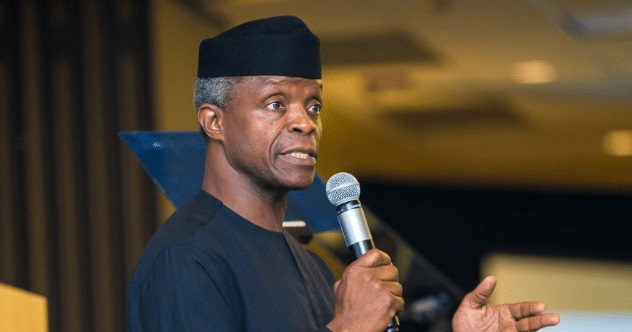 Nigeria’s Vice President, Yemi Osinbajo, Tuesday said the government of President Muhammadu Buhari was achieving more than previous governments under the Peoples Democratic Party (PDP) because resources meant for development are not being stolen.

He assured that Nigeria will not go back to era when money meant for the development of the country was diverted by few individuals.

Osinbajo stated this in Dutse, the Jigawa State capital, while launching the 6th phase of a youth empowerment initiative.

”Nigeria is moving forward to next level. This is one of the reasons why President Muhammadu Buhari decided to fight corruption in Nigeria; because before now, a lot of the money that was supposed to empower the common man on the street were put in the pockets of those that led us before.

“When we came on board, we insisted that must stop, they can no longer be stealing people’s money, the money must be utilised for the well-being of all Nigerians,” the vice president said.

He said, ”When President Buhari started the fight, those who looted public treasury opposed him and they’re still fighting him till now. By God’s grace, Nigerians will see the benefits of the anti-corruption fight.”

He also said before the current government came on board, the previous one ”earned $383 billion in four years” but wasted it.

”They didn’t construct roads, no empowerment, they embezzled the money. For three years, the APC administration earned only over $115 billion. That’s (about) one-third of what they had and we’re doing five times more.

“We’re doing more because we’re not stealing the money. If the money of our people is not stolen, there will be enough for us to do everything,” he said.

He also explained the rationale behind the government’s ‘Trader moni’ scheme.

“The Trader moni is one of the important policies of President Buhari’s administration. It is giving loans to 35,000 beneficiaries, petty traders in Jigawa; and we’re targeting two million beneficiaries across the country.

“The initiative targets those at the bottom of the pyramid, we will keep empowering them until they are lifted to become bigger traders.”

The vice president also commended the governor of Jigawa for ”the good work he has been doing.”

In his remarks, the governor, Muhammad Badaru, said his administration has so far empowered over 134,600 youth through various programmes across the 27 local government areas of the state.