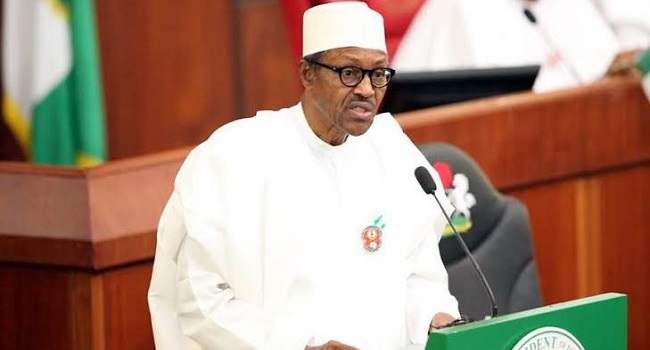 President Muhammadu Buhari on Wednesday as expected presented the 2019 budget proposal to a joint session of the National Assembly.

Buhari presented the budget in the company of Vice President Yemi Osinbajo and members of the Federal Executive Council (FEC).

Buhari was welcomed with shouts of “Sai Baba’’ by lawmakers believed to be those of his All Progressives Congress (APC) members and others loyal to him.

However, when he started the presentation, he was booed by the lawmakers especially when he touched on matters like improvement of Nigeria economy.

The joint session of the Senate for the event was presided over by the Senate President, Bukola Saraki, and Speaker of House of Representatives, Yakubu Dogara.

Buhari at a stage had to caution the lawmakers booing him, asking them to comport themselves because they are on television and being watched across the world.

The lawmakers, supposedly members of the opposition had interrupted Buhari intermittently while the presentation lasted.

As Buhari began to mention his achievements he was embarrassed by shouts of ‘Nooooo!’

When the President claimed his government has weathered the storms and made progress on every front, the protesting lawmakers responded with screams of “Nooooo ! Boooo!”

On saying that “the economy has recovered well”, more shouts of “Nooooo! Boooo!” took over the chamber.

The development almost caused a fight between opposition lawmakers and their APC counterparts who were ostensibly harassed by the treatment their colleagues were meting out to the President.

Other words the protesting lawmakers used in response to Buhari’s claim during the presentation were words like ‘Lies, propaganda’.

A voice from the crowd at a point shouted “grass cutter.” It was believed to be alluding to the scandal which the last Secretary to the Government of the Federation, Babachir Lawal, was enmeshed in.

“The world is watching us and we are supposed to be above this,” Buhari told the lawmakers.