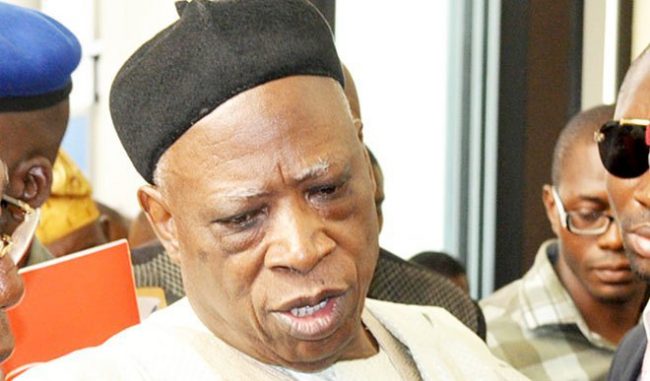 Abdullahi Adamu, the All Progressives Congress (APC) senator representing Nasarawa West, says but for the selective nature of President Muhammadu Buhari’s anti-graft war, former president Olusegun Obasanjo would have been arrested for acts of corruption perpetrated by him while in power.

Adamu, a former governor of Nasarawa State, said this in an interview with reporters on Monday.

Reacting to the letter Obasanjo wrote to the president asking him not to seek re-election, Adamu said the former president lacked the moral standing to give such advice.

He said Obasanjo did everything to secure a third term in office even though he continues to deny it.

“Chief Obasanjo said President Buhari is selective in his anti-corruption war. I agree with him because if the president were not selective, Chief Obasanjo himself would be in the dock today on trial on charges of corruption arising from the corrupt practices in the pursuit of his third term gambit in the national assembly in 2006,” Adamu said.

“He (Obasanjo) knows, as well as I and other leading members of the PDP, that he badly wanted it and initiated the process of constitutional amendment. He bribed each member of the national assembly who signed to support the amendment, with the whopping sum of N50million.

“The fresh mint money was taken in its original boxes presumably from the vaults of the Central Bank of Nigeria and distributed among the legislators.

“The money was not his, and it was not appropriated by the national assembly, as required by law. I therefore, agree that in failing to make former President Obasanjo account for the money, President Buhari is waging his anti-corruption war selectively.

“Nor should we forget that President Buhari has also not bothered to interrogate Obasanjo’s role in the Halliburton scandal for which some Americans are cooling their heels in jail. Perhaps President Buhari might wish to look in the Siemens affairs in which the Obasanjo administration was indicted.”

Read also: Nigerians must be ready to sacrifice even their lives for the good of the country- Buhari

The lawmaker said since he left office as a military ruler, Obasanjo had taken particular interest in attacking his successors.

“Since he left office on October 1, 1979, to local and international applause, Obasanjo has systematically sought to undermine every federal administration after him. He has today set up himself as the moral conscience of the nation,” he said.

“He believes he has acquired the wisdom of King Solomon and has consequently imposed on himself the right to decide who rules us and how we should be ruled.

“Perhaps, part of the reason is that before leaving office in 2007, his party, the PDP, conferred on him the titles of Maker of Modern Nigeria and Father of the Nation. Such titles do have a heady way of making a man seeing his head bedecked in the halos of self-righteousness.”

Adamu alleged that Obasanjo’s eight years in government almost ruined democratic governance in Nigeria as a result of “self-delusion and messianic mentality”.

“He waged his anti-corruption in a manner intended to rubbish all our reserved institutions such as the courts and the national assembly in a way to be the only Nigerian without palm oil on his hands,” he said.

“The courts quaked over his unconstitutional rampage. Chief Obasanjo left our democracy in a lurch. He was like a wrecking ball. In 2007, he alone, decided his successor in office contrary to the rules of the game, the repercussions and consequences of which are now history.

“I worked closely with Chief Obasanjo in his eight years in office as president when l was governor of Nasarawa State. I found many things to admire in him.

“I admire his patriotism and his hard work. But he systematically sabotaged his legacy by bending the system to his personal service and promotion. I do not admire his single-minded determination to promote himself as the strongest and the most incorruptible leader Nigeria has ever had.

“He waged his anti-corruption war in a manner intended to rubbish all our revered institutions such as the courts and the National Assembly and leave him as the only Nigerian without palm oil on his hands.”

He accused Obasanjo of attempting to rubbish all former presidents and making himself the most successful.

“As a friend, I wish to advise the former president to pull back from the dangerous path of rubbishing all presidents that came into office after him. Bringing everyone down is not a patriotic duty,” he said.

“I fear that if he continues along this path, he would, sooner than later overreach himself and begin the inevitable descent into national nuisance and irrelevance. That would be a self-inflicted wound and a personal tragedy.”

He warned Obasanjo to desist from the habit or he “will end up being a national nuisance and irrelevant figure”.

He blamed Babangida for some of the economic problems the country still grappled with, attributing them to his “faulty” transition programme.

“I wish to remind the general that although men have short memories, history has a long memory. We can trace nearly all our present economic and political problems to his transition programme,” he said.

“We cannot forget SAP that sapped the economy or the annulment of the June 12, 1993, presidential election for which the nation is still paying a stiff price. It is not always advisable to be holier-than-thou.”

Since looters now deny their assets, we’ll sell them and put the money in the treasury- Buhari