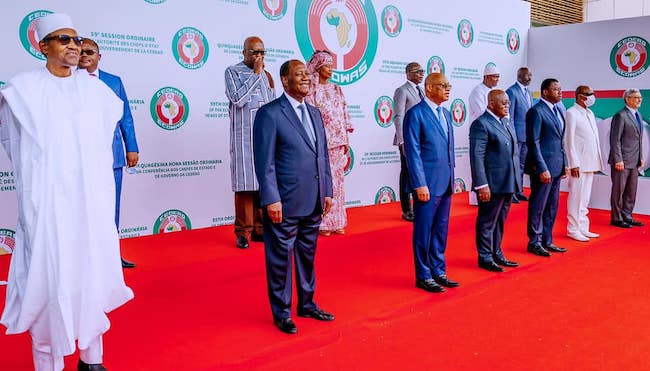 The Economic Community of West African States (ECOWAS) on Saturday pledged to continue to sustain democracy and democratic tenets among member-countries via the conduct of free, fair and acceptable elections.

The Chairman of ECOWAS and President of Ghana, Nana Akufo-Addo, made the pledge at the opening of the 59th ordinary summit of the authority of Heads of State and government of the organisation, held in Accra, Ghana.

The Ghanaian President also thanked all African countries for supporting the candidacy and election of Ghana into the United Nations Security Council as a non-permanent member.

He also expressed happiness at the support he had received from his colleagues in the West African region, and called for more collaboration, in order to move the sub-region forward.

Akufo-Addo commended the efforts of African leaders towards sustaining democratic tenets on the continent.

He congratulated the President of Republic, Mohammed Bazoum; and his Benin Republics counterpart Patrice Talon; on their success in the countries’ elections.

He said: “Let me congratulate our brothers and colleagues, Mohammed Bazoum and Patrice Talon, who have been elected as Presidents of the Republics of Niger and Benin, since our last summit.

“I offer them my and the community’s best wishes for their success during their terms of office.

“I also commend the Republics of Cote D’Ivoire and Cape Verde for the conduct and outcomes of their latest legislative elections. Our region continues to strengthen its democratic credentials through the holding of successful elections.

He also assured Africa of a worthy representation at the UN Security Council.

Akufo-Addo added: “On behalf of the government and people of Ghana, I thank all ECOWAS and AU Member States for the support of Ghana’s recent successful candidate for a non-permanent seat in the United Nations Security Council for the years 2022 and 2023.

“Ghana received the highest number of votes on the day, with 185 out of 190 votes and it would not have been possible without your active support.

“I assure you that Ghana will make sure that Africa’s voice is heard loud and clear in the deliberations of the Security Council, both for matters affecting our region, the African continent, and on global issues and we will consult properly to define Africa’s interest.”