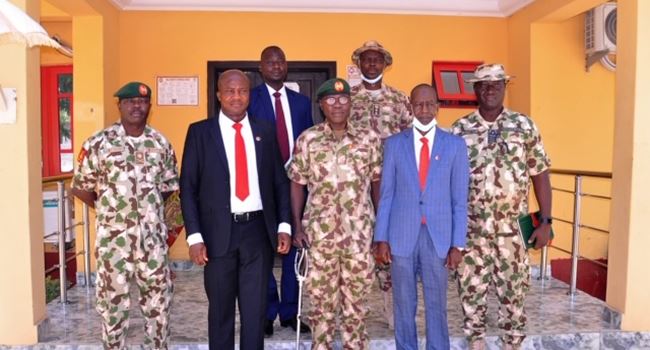 The Economic and Financial Crimes Commission (EFCC) has stressed the need for the Nigerian Army and the Commission to collaborate in the fight against money laundering and terrorist financing in the Northeast part of Nigeria.

According to him, ”the Theatre Command is a very critical stakeholder in the fight against corruption and the role it plays is enormous. Therefore, it is necessary and important for the Nigerian Army to join hands with us to end insurgency in Nigeria by identifying and cutting off the source of financing for the insurgents.

”We want to equally inform you that in carrying out our mandate the Commission ensures that movement of cash by Non-Governmental Organisations across the local governments in Borno, Yobe and some parts of Adamawa states must be approved by the Zonal Office”.

He further stated that if sponsors of insurgency, kidnapping were cut off, the fight will be worn by the Theatre Command.

Obiora appealed to the Command to report suspected illicit funds linked to NGOs or individuals to the Commission.

In his response, the Theatre Commander, Major General F. Yahaya pledged the Command’s support to the EFCC.

According to him, the Army will help the Commission in identifying and reporting the bad eggs amongst NGOs, Bureau de change operators and other local contractors with the aim of stopping money laundering and terrorists financing in the Northeast.

In a related development, the Army has pledged to improve the existing relationship between it and the EFCC. The Commander, 3 Brigade Nigerian Army, Kano, Brigadier General S. Nicodemus made the pledge Thursday May 6 when he visited the Kano Zonal Office of the EFCC.

The General who assumed command of the Brigade on April 23, 2021 said the visit was to cement the existing relationship between the Army and the Agency.

He disclosed that he was briefed by his predecessor of the cordial relationship that exists between the Brigade and the EFCC and urged the Zonal Head to uphold the relationship.

Dogondaji further stated that the doors of the Commission were open to the Nigerian Army.

Related Topics:ArmyEFCCFight against terrorism
Up Next