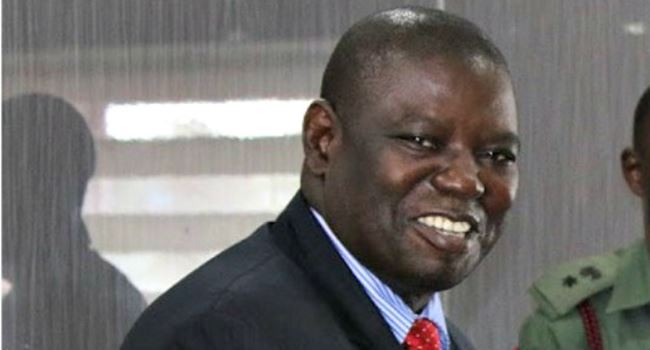 The Economic and Financial Crimes Commission (EFCC) on Thursday re-arraigned a former Director-General of the Nigerian Maritime Administration and Safety Agency (NIMASA), Haruna Jauro, for alleged fraud at the Federal High Court, Lagos.

The defendant was arraigned alongside one Dauda Bawa and Thlumbau Enterprises Limited on a 19-count charge of fraud and money laundering to the tune of N156.4 million.

They were first arraigned before Justice Mojisola Olatoregun on April 12, 2016 on the same number of charges.

They, however, pleaded not guilty to the charges and the judge granted them bail in the sum of N5 million each with two sureties in like sum.

However, following the retirement of Justice Olatoregun, the trial commenced afresh before Justice Chuka Obiozor.

The defendants were re-arraigned before Obiozor where they again pleaded not guilty and were allowed to continue on the earlier bail granted to them.

However, following the transfer of Justice Obiozor from the court’s Lagos Division, the case was transferred to a new judge, Justice Tijani Ringim, and the charge was fixed for re-arraignment.

When the case was called on Thursday, Mr. A.O Mohammed announced an appearance for the prosecution and Mr. N.Y Chiwar for the defendants.

Chiwar told the court that the lead counsel, Mr. Olalekan Ojo (SAN), was unavoidably absent as he was appearing before the Court of Appeal.

He also revealed that the defence had filed a formal plea on the third defendant, who is an artificial person in law, in line with the provisions of Section 478 of the Administration of Criminal Justice Act.

‘Let them have a heart attack over my presidential bid. I’m having fun,’ Emefiele mocks Nigerians