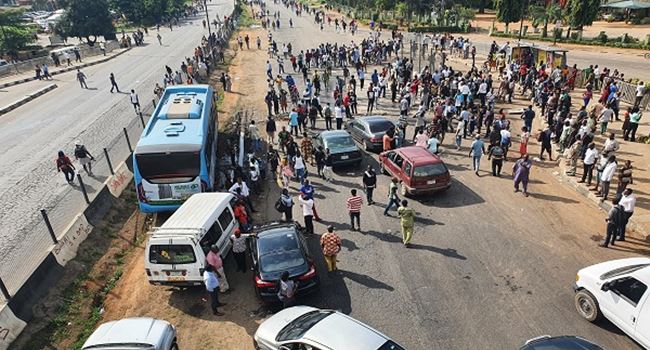 Protesters in the #EndSARS campaign on Monday morning shut down access to the Lagos State government’s Secretariat in Alausa, Ikeja.

The protesters, some of whom passed the night around the Secretariat trooped out in the early hours of the day, and blocked the roads preventing workers from gaining access into their offices.

They locked all the entrance to the Secretariat and motorists and pedestrians were turned back from coming out and going into the premises.

The action caused a traffic gridlock on roads around the Secretariat.

Protests against Police brutality have been ongoing for several days now around parts of the country, calling for a Reformation of the Nigeria police.

Not even the disbandment of the notorious SARS unit has been enough to satisfy the protesters.

EndSARS protesters had previously camped round the Lagos Secretariat area, and the state House of Assembly, but did not prevent workers from going about their duties.

But that changes today.