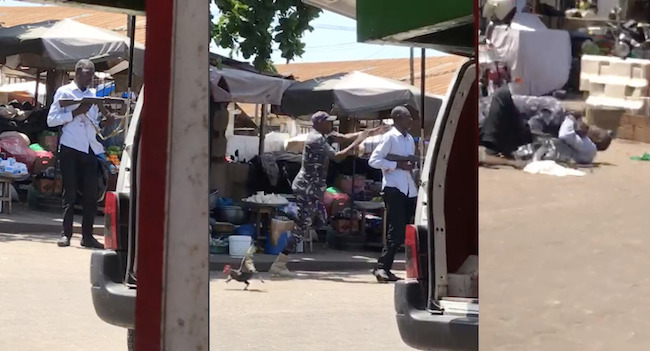 CLAIM: A video showing how a police officer attacked and brought down a gun-wielding man emerged on social media on Sunday. There were claims that the video was shot in Owo, Ondo State, where unknown gunmen attacked a Catholic Church and the man overpowered by the police officer was one of the attackers.

Several videos from the scene had since surfaced on social media.

While the identities of those behind the attack have not been ascertained, there were insinuations that the perpetrators of the dastardly act are herdsmen.

A video later surfaced on the internet, claiming that one of the attackers was apprehended hours after the attack.

George Bakpo, who posted the video on Facebook, attached a caption: “Brave Nigerian Police officer brought down one of the Ondo Church attacker.”

The post was viewed by 67 users and shared by 12 others.

Ripples Nigeria conducted frame by frame analysis of the video using InVid, a verification tool. One of the frames returned with a result. A reversed image search of the screenshot shows that the video had appeared on the internet before June 5, when the church attack occurred.

The picture of the police officer attacking the gunman was posted on Twitter on June 3 by Angelo Barnabo.

The caption was written in French while the English translation read: “A Hero, the bravery and promptness of this agent is to be saluted and encouraged. May he heal from the wounds and may the eternal grant him long life promotion.”

Ripples Nigeria also observed that the police officer’s uniform was not that of the Nigerian Police Force.

FACT CHECK: What we found about Helen Paul’s Professorial appointment