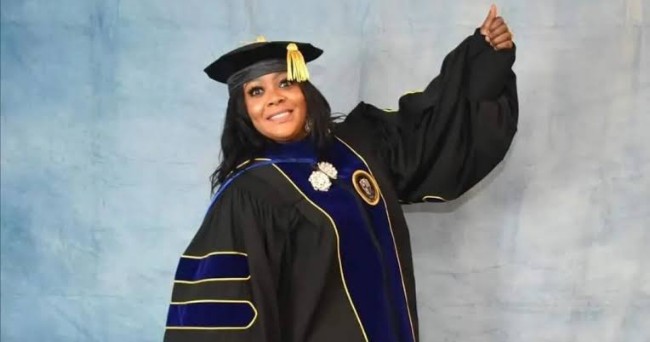 On Monday, popular comedienne, Helen Paul announced on her Instagram page that she had been appointed a Professor at a US-based University, and promoted to Head of a department, in the same university.

In multiple posts, she celebrated her appointment and promotion. She also flaunted her husband who bagged a Ph.D from the same university.

In one of the posts, she wrote, “Congratulations to us my love. Such a great honor for both of us. You graduated as a Doctor of law and I was promoted too. Professor Helen Paul, now the new H.O.D Department of Arts, Music and Entertainment. Herat International University, USA.”

It was reported by various national newspapers and blogs.

Back to the university’s website. On its ‘About us’ page, the University, which was said to have been founded in 2008 introduces itself thus: “HBI is an online institute of higher education where students discover and grow in their God-giving gifts and callings.”

On its Accreditation & Affiliation Page, the university explained that it is annually verified by the Florida State. Meanwhile, the Florida Department of Education stated that Religious institutions are not under its purview. Conformably with HBIU’s claim, the Florida Education department explained further that while a religious college may operate without governmental oversight, it is subjected to an annual verification by sworn affidavit.

The requirement as contained in Section 1005.06(1)(f), of the Florida Statute reads:

“A religious college may operate without governmental oversight if the college annually verifies by sworn affidavit to the commission that:

“The name of the institution includes a religious modifier or the name of a religious patriarch, saint, person, or symbol of the church.

“The titles of degrees issued by the institution cannot be confused with secular degree titles. For this purpose, each degree title must include a religious modifier that immediately precedes, or is included within, any of the following degrees: Associate of Arts, Associate of Science, Bachelor of Arts, Bachelor of Science, Master of Arts, Master of Science, Doctor of Philosophy, and Doctor of Education. The religious modifier must be placed on the title line of the degree, on the transcript, and whenever the title of the degree appears in official school documents or publications.”

Ripples Nigeria found that Helen Paul’s appointment, albeit worthy of celebration, is being confused with secular professorship.

The university acknowledges its academic limitations. It states on its website, “Let it be known that the credits and degrees earned through our Christian University are for religious services and may not be accepted by all colleges.”

“​The titles of degrees issued by the institution cannot be confused with secular degree titles. For this purpose, each degree title must include a religious modifier that immediately precedes, or is included within…”

However, Helen did not include a religious modifier, which would have distinguished her from a secular Professor.

FACT CHECK: Did a brave Nigerian policeman hunt down one of the terrorists who stormed Owo church?

FACT CHECK: Did a Rev. Father take AK 47 to church after mob killed Deborah in Sokoto?