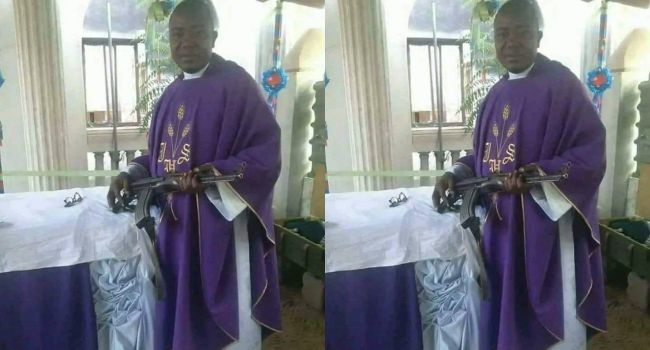 CLAIM: A picture is being circulated on social media, purportedly of a Catholic priest in Sokoto State, who went to church with an Ak 47 rifle after the mob killing of Deborah Samuel, and the subsequent protest by Islamists justifying her killing.

A facebook user, Bliss Naija, on May 15, shared the picture with the caption below:

“SHOCKER: Rev Father Goes to Church With AK 47 to Defend Himself Against Islamists Protesters in Sokoto

S/he Wrote: “Today I came to church with this to defend myself against Sokoto state Islamists fanatics youths”

The post generated 206 likes and 356 shares. Over 200 persons commented on the post, all of whom believed the story attached to the picture.

The picture, with the same caption also appeared here, and here, with multiple likes and shares.

The picture surfaced a few days after the brutal killing of Deborah Samuel, a student of Shehu Shagari College of Education (SSCOE) for alleged blasphemy against the Islamic Prophet Muhammad.

Deborah, who was a 200-level student of Home Economics, was killed and burnt by a mob, on May 12, within the school premises. The killing has since generated controversy among Nigerians. While many condemned the act and demanded justice, some, especially northerners justified the killing

The Police in the state reportedly arrested two suspects in connection with the killing, while the federal government called for calm. However, the next day, some youths in the state justifying Deborah’s gruesome killing protested against the arrest of the suspects.

The matter caused tension in the state, as there were reports of attacks on churches by the protesters. The state government declared a curfew to contain further escalation of crisis.

Ripples Nigeria conducted a reversed image search on the picture. The results showed that the picture had been on the internet before Deborah’s killing in Sokoto. The earliest version of the picture found was posted in January, 2017.

According to a report by PUNCH on January 29, 2017, the picture was shared by one Achike Onwuazo on Facebook.

According to the report, Onwuazo wrote, “Carry go, my blessed Rev. Father. He who is surrounded by his enemies (Fulani herdsmen and Boko Haram) is always alert.

The report implied that the picture may have been shared in the heat of reported attacks by killer herdsmen in the southern region. It also alluded to an invasion by armed herdsmen on the Attakwu community of Enugu State, the previous year.

The picture has no connection with the killing in Sokoto State, hence the claim that the cleric took the rifle to church to defend himself against Islamic protesters in Sokoto, is false.

FACT CHECK: What we found about Helen Paul’s Professorial appointment